Showing just how little it cares about FedEx (NYSE:FDX) cancelling its domestic Express delivery contract, Amazon.com (NASDAQ:AMZN) ordered up 15 more cargo planes at the recently held Paris Air Show that will allow it to carry more of its own packages.

While the purchase was likely planned long before FedEx decided to kick it to the curb, as Amazon rolls out one-day delivery for Prime members, having greater control over shipping packages becomes increasingly important. Internally handling the logistics of the process gives it greater flexibility to meet those demands, but it also increases Amazon's learning and skill in performing the task should it ever decide to become a third-party carrier, as many suspect it will. 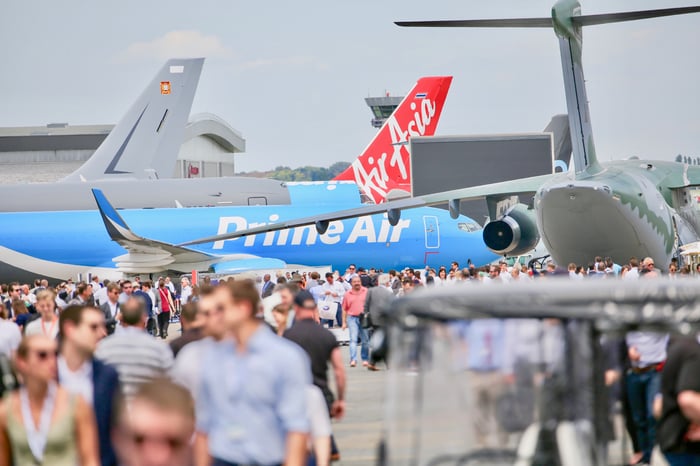 A play for greater capacity

You don't typically associate Amazon with the world's largest air show and aerospace exhibition, but the e-commerce giant agreed to lease an additional 15 Boeing 737-800 cargo aircraft through General Electric's (NYSE:GE) GE Capital Aviation Services (GECAS). They will be in addition to the five Boeing 737-800s Amazon leased from GECAS earlier this year. By 2021, Amazon says it will be operating 70 planes.

The increased capacity Amazon gets from the new planes, even after accounting for the loss of the FedEx business, makes it a potential contender to become a competitor to the carrier and its rival UPS (NYSE:UPS). Although 70 planes is just a fraction of the 700 aircraft that FedEx flies, Amazon doesn't need a comparable fleet to start making significant inroads against the primary carriers. Amazon may say it is simply adding capacity for its own packages, but it increasingly looks like the online retailer is preparing to enter the third-party package delivery fray.

The e-commerce giant is building an Amazon Air hub at the Cincinnati/Northern Kentucky International Airport that will open in 2021, which at full capacity could handle 100 planes. It is opening an expanded regional air hub at Fort Worth Alliance Airport next year and will open a new sorting facility in Ohio's Wilmington Air Park. It also entered into an agreement giving it the right to acquire a 40% stake in Atlas Air Worldwide and a 33% ownership position in Air Transport Services Group, the two aircraft leasing companies through which Amazon operates its Prime Air cargo service.

Amazon further ordered 20,000 Sprinter vans last December to lease to third-party delivery companies. It has its own fleet of tractor trailers, is offering $10,000 for employees willing to start their own delivery companies under the Prime banner, and last year delivered more than 5,300 shipping containers through ocean freight subsidiary Beijing Century Joyo Courier Service. It also said for the first time in its SEC filings that it considers other logistics providers to be its competition.

From end to end, manufacturer to customer doorstep, Amazon is now a fully integrated e-commerce company that has begun experimenting with third-party delivery services in Los Angeles. As its fleet of cargo planes grows, scaling up the service for regional deployment becomes increasingly an easier task.

The high cost of growth

Amazon making incursions into third-party package delivery could harm FedEx, which operates on some pretty thin margins. Although it just reported it generated $69.7 billion in revenue in fiscal 2019, adjusted operating margins were 7.5%, down from 7.8% a year ago, and net margins were 5.9%, down from 6.4% last year. UPS's margins, although better than FedEx's, would still be impacted if Amazon decided to go full bore on delivery for others.

Amazon has faced sharply rising shipping costs in recent years as competition to get packages to customers the fastest increased the stakes and ramped up retail promises for delivery speed. Both Walmart and Target are also banking on one-day delivery guarantees to increase order share.

Amazon spent $27.7 billion on shipping in 2018, nearly a 28% increase over the year before, and spending was 21% higher in the first quarter, hitting $7.3 billion. Having greater control over how its packages get to the customer and opening up the capacity available by leasing more planes ensures it can handle the load of its own business -- and perhaps that of third-party retailers too.