Shares in Caterpillar (NYSE:CAT) soared 13.8% in June, according to data provided by S&P Global Market Intelligence. The move marked a return to favor for some of the stocks that got beaten up during the sell-off in May. Was there anything fundamental in the move? Unless you count a television interview in which CEO Jim Umpleby expressed confidence in the company's ability to meet its targets, then the only real change is one of market sentiment toward cyclical stocks impacted by the ongoing trade dispute.

Simply put, the market decided it had oversold stocks like Caterpillar on fears of a protracted slowdown in its end markets.

Caterpillar is known for its construction machinery, and that remains its single biggest profit center. However, the biggest swing factor in its earnings this year is likely to be its mining machinery sales (resource industries segment) and, to a lesser extent, its oil-and-gas-related sales (energy and transportation segment). 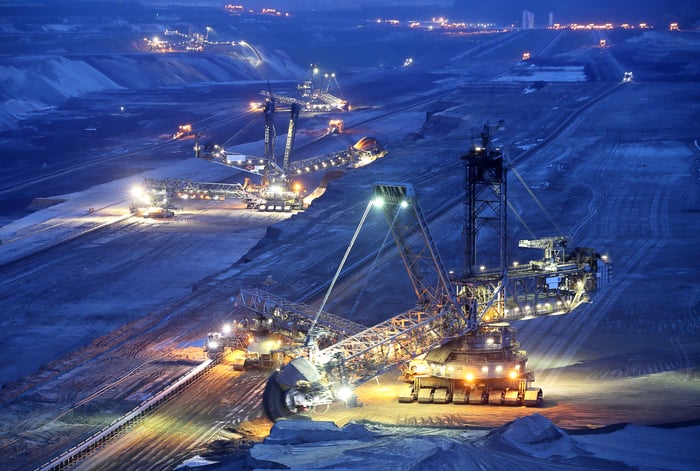 The hope is that construction sales will remain in moderate growth mode, but mining industry capital spending is expected to improve in the second half, leading to a multiyear expansion in spending following a previous slump. Furthermore, as the Permian Basin takeaway issues subside -- pipelines are currently being built to increase takeaway capacity -- spending on upstream oil and gas equipment should improve also.

However, for both segments to see improvements, it's likely that their end market commodity prices -- oil and gas and minerals -- will need to, at the least, stabilize. Moreover, Caterpillar expects better pricing in the second half -- something that will help offset ongoing pressure on manufacturing costs.

Keep an eye on management's commentary during the next earnings report, particularly with regard to the outlook for mining capital spending and competitive pressure in China within construction machinery -- CFO Andrew Bonfield referenced it on the first-quarter earnings call -- as well as the usual concerns around the impact of trade tariffs.

All told, Umpleby has expressed comfort in Caterpillar's guidance, and now it needs to be confirmed on the upcoming earnings call in July.