The third season of Stranger Things began streaming through Netflix (NASDAQ:NFLX) on Thursday. The creepy retro series has been one of the service's most popular original franchises, and launching its third season on the Independence Day holiday in the middle of a heatwave as folks crave air-conditioned comfort is brilliant timing.

Every new season matters for Netflix, as its growing audience translates into a likely larger base of viewers. There were 83.2 million subscribers worldwide when the first season debuted on Netflix three summers ago, and its earlier guidance called for 153.9 million streaming accounts when this month began. Folks are also paying more than they were three years ago, explaining why revenue has soared 134% in a time during which the subscriber base nearly doubled. In short, Netflix has a lot more money to spend on content.

Netflix isn't the only one cashing in on the growing popularity of Stranger Things. Coca-Cola (NYSE:KO), Comcast (NASDAQ:CMCSA), Restaurant Brands International's (NYSE:QSR) Burger King, and even J.C. Penney (OTC:JCPN.Q) are some of the publicly traded companies that are riding on the coattails of the series for the brand new season. 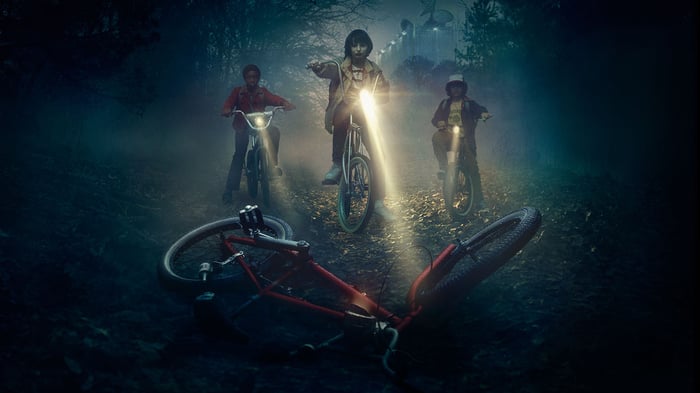 The third season of Stranger Things takes place in 1985, the year that the world's largest beverage company introduced the ill-fated New Coke. Coca-Cola was losing market share to Pepsi, particularly to younger soda sippers. In a risky gamble to stay ahead, Coca-Cola was willing to reformulate its iconic soft drink as a sweeter product to take on its smaller, yet feisty, rival.

New Coke tested well in blind taste tests, with most participants preferring it to the original Coca-Cola, as well as Pepsi. It was a different story when New Coke hit the market in the springtime of 1985. There was public outrage that Coca-Cola would abandon its signature offering. One can only imagine how fierce the reaction would've been if social media was around at the time.

Coca-Cola quickly saved itself, rolling out the original version as Coca-Cola Classic. New Coke would eventually disappear, but Coca-Cola is using Stranger Things to get it back into the spotlight.

New Coke features prominently in the third season. Mrs. Wheeler is sipping New Coke poolside as she ogles Billy the lifeguard starting his shift. Dustin and Steve are drinking New Coke at the movie theater. Lucas professes his love for the stuff!

All of this wouldn't matter if Coca-Cola was merely cashing in on a quirky chapter of its history, but it's obviously smarter than that. New Coke is being released for a limited time. Consumer reactions will likely be kinder the second time around.

One of Netflix's biggest rivals is also cashing in on Stranger Things. Comcast is the country's leading cable television provider and at the mercy of the cord-cutting revolution spearheaded by Netflix. However, Comcast also owns NBCUniversal, and last week, it turned heads by outbidding Netflix for exclusive streaming rights to The Office for the online service it expects to launch next year.

Fast food loves to chase hot trends, and this time, it's Burger King (BK) hopping on the Stranger Things bandwagon. BK parent Restaurant Brands International is teaming up with Coca-Cola and the Netflix series to put out Stranger Things branded cups. The cups feature icons that can be scanned on the Burger King or Coca-Cola apps for sweepstakes entries.

Restaurant Brands International's burger chain also got an early promotional wave last month when it introduced "The Upside Down Whopper." The burger -- basically a Whopper served upside down in unique packaging -- was only available in 11 different locations for a limited run, but it was able to generate publicity for both Burger King and Stranger Things.

There are several prominent 1980s retail brands featured prominently in Stranger Things, a no-brainer since a new shopping mall plays a prominent role in the series. Instead of listing them, the show decided to go with J.C. Penney, the fading department-store operator that can use a boost after another rough quarterly outing.

I'm just two episodes into the new season -- I binge responsibly and in moderation -- but J.C. Penney is shown whenever the show cuts to a scene at The Starcourt Mall. Even outside of the mall, Hopper is handed a J.C. Penney bag in the second episode. Hop on to J.C. Penney's website and you can order a couple of Eleven's outfits, as well as Dustin's signature cap. J.C. Penney may be on borrowed time, but you can't blame it for going down fighting.