The media giant is paying a Netflix price for reruns of "The Office," but it doesn't have Netflix's audience.

Comcast's (CMCSA 1.46%) NBCUniversal plans to launch a streaming service sometime next year, and starting in 2021, it'll get to showcase a key fixture of the NBC content library. The company just bought the rights to The Office in an auction held by subsidiary company Universal Television, outbidding Netflix (NFLX 4.15%) and others for the streaming rights. It agreed to pay $100 million per year for five years.

The Office will still be available on Netflix through 2020.

NBCUniversal's agreement to pay its sister company $500 million is the most concrete example of the true cost for media companies like it, AT&T's (T 0.66%) WarnerMedia, and Disney (DIS 1.64%) to launch their own streaming services. While Comcast is merely moving money from one hand to another, it's also foregoing the opportunity to bring in significant revenue from an outside licensee like Netflix. 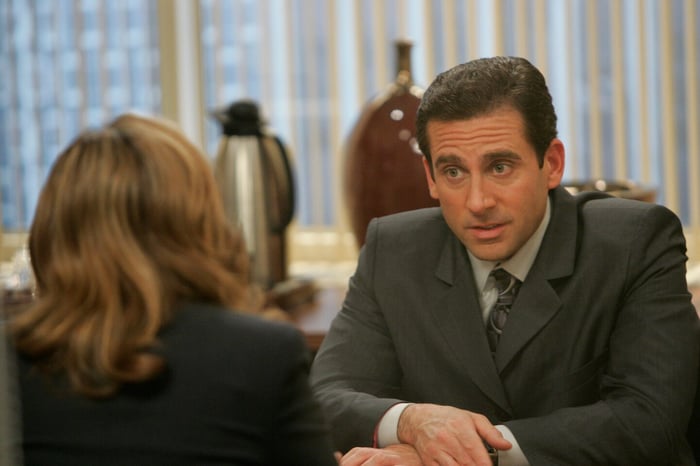 A still from The Office. Image source: NBC.

The Office has been streaming on Netflix ever since the DVD-by-mail service started streaming, and it might still be the most popular series on Netflix today. But that doesn't necessarily mean consumers subscribe to Netflix just to watch a series that's been off the air for six years.

The same is true of Friends, Grey's Anatomy, or any number of syndicated series currently available on streaming services.

Still, Netflix is willing to pay huge sums for that content because it has broad appeal and keeps subscribers engaged. It's the stuff subscribers watch while they're waiting for the next release of their favorite original series. Or it's the stuff that's just on in the background while cleaning, or cooking, or doing whatever household activity. It's not the stuff people subscribe to a streaming service for and eagerly sit down on their couch to actively watch.

Netflix could afford to spend $100 million per year on The Office, for example, because it's able to spread that cost over the tens of millions of customers that watch the series every month. NBCUniversal's streaming service is starting from zero. Spending $100 million to keep The Office is a heck of a lot more expensive for NBCUniversal than it is for Netflix.

NBCUniversal's half-a-billion-dollar bet on The Office carries the significant risk that the series won't attract the same attention it does on Netflix. In other words, it's overpaying, but it doesn't have a choice.

Netflix is going to lose The Office, Disney's movie catalog including Marvel and Star Wars films, and probably Friends. The three media companies may also look to retain more of their own content in the future. A recent poll from Morning Consult and The Hollywood Reporter found that 32% of U.S. subscribers say they'll cancel their subscription if Netflix loses that content.

Of course, subscribers have been known to threaten to cancel Netflix before. Polls come out with very high cancellation intention every time the company announces a price increase. Nonetheless, Netflix has shown excellent subscriber retention despite its price climbing around 60% over the last five years.

To its credit, Netflix has been busy producing content that offers a suitable replacement for shows like The Office or Friends -- the shows subscribers put on and don't have to pay close attention to. It's dramatically increased its unscripted reality shows and even some of its older original sitcoms could potentially reach the level of those rewatchable stalwart series it's losing.

Investors should expect vocal subscriber complaints, but they're unlikely to close their wallets, especially as Netflix reinvests the money it would spend on licensing content on more originals. Netflix has much less to worry about than NBCUniversal or WarnerMedia when it comes to getting value out of its content spend.