The Super RTX cards are squarely aimed at AMD's (NASDAQ:AMD) recent introduction of its high-end Radeon RX 5000-series cards. But are they enough? 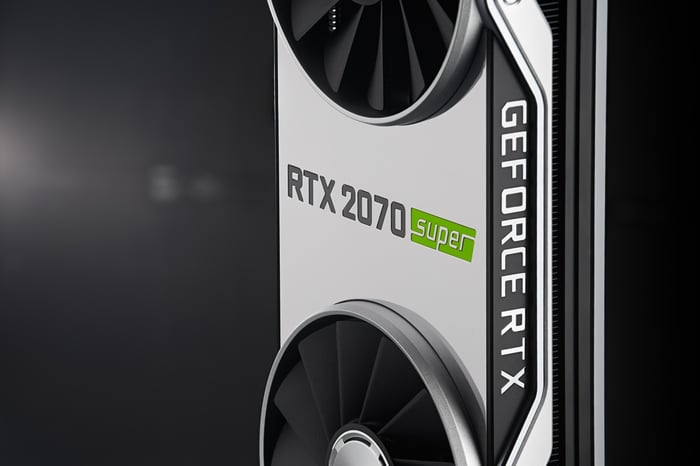 Early benchmarks indicate that the Radeon VII offers performance comparable to that of the regular RTX 2080. With a 15% speed boost at the same price, the Super RTX 2080 could be a better value than the Radeon VII.

NVIDIA is upgrading its RTX cards because it desperately needs its gaming GPU sales, which were throttled by the bursting of the cryptocurrency mining bubble and longer upgrade cycles, to accelerate again. Its gaming GPU revenue rose 11% sequentially last quarter, but still fell 39% annually and accounted for nearly half of its top line.

During  a May conference call with analysts, NVIDIA CFO Colette Kress said that those figures were "consistent" with the company's expectations as it cleared out some inventories of older Pascal cards and ramped up its launch of new Turing cards. Kress highlighted the launches of the new mid-range GTX 1660 Ti, 1660, and 1650 cards as potential catalysts for the business.

To counter the common criticism that NVIDIA's high-end cards are getting too pricey, Kress noted that NVIDIA now sells cards at "every price point, starting at $149." The decision to upgrade the higher-end RTX cards with "Super" editions (and likely accept lower gross margins per card) complements that strategy.

Newzoo's latest survey also found that the GTX 1060 was the most popular GPU for the top five core PC games in the world -- League of Legends, Minecraft, Hearthstone, CS: GO, and Fortnite. All those games have low hardware requirements, so gamers probably aren't compelled to spend hundreds of dollars on new cards.

Second, only a handful of current-gen games support ray tracing. NVIDIA recently unlocked ray tracing on the 1060, 1070, and 1080 cards to give Pascal users a taste of the Turing feature at lower settings, but that desperate move probably didn't convince gamers that it was a killer feature for current-gen games. Meanwhile, the gaming market is evolving. AMD will bring ray tracing features to Sony's and Microsoft's upcoming consoles, which could offer comparable performance as pricey gaming PCs for a fraction of the price. Cloud gaming platforms like Stadia and PS Now could also throttle sales of high-end cards for gaming PCs.

Lastly, cryptocurrency prices are rising again. If miners start loading up on high-end GPUs once more, market prices will spike and alienate mainstream gamers again. NVIDIA's gaming GPU sales would get another short-term boost, but miners could flood the market with cheap cards again if the bubble pops.

NVIDIA's core market is shrinking into a niche

NVIDIA's decision to upgrade its RTX cards with "Super" versions indicates that it's desperate to reach more high-end gamers and hold AMD at bay, but that niche market is shrinking. As a result, NVIDIA needs to rely more heavily on its other businesses -- like data center chips (recently boosted by its takeover of Mellanox), professional visualization GPUs, and automotive chips -- to stabilize its long-term growth.