Please ensure Javascript is enabled for purposes of website accessibility
Free Article Join Over 1 Million Premium Members And Get More In-Depth Stock Guidance and Research
By Daniel B. Kline - Jul 6, 2019 at 8:01PM

The company has turned to its employees for help.

To accomplish that goal, the company has decided to turn to its employees for help. Instead of letting management or consultants come up with the ideas, the chain has brought employees to its Tryer Center innovation lab to compete in a reality show-style competition.

Five teams presented ideas after being selected from an initial group of pitches sent via digital methods. The idea to source ideas from workers came from Suzanne Tedrow, Starbucks' program manager for energy and sustainability. 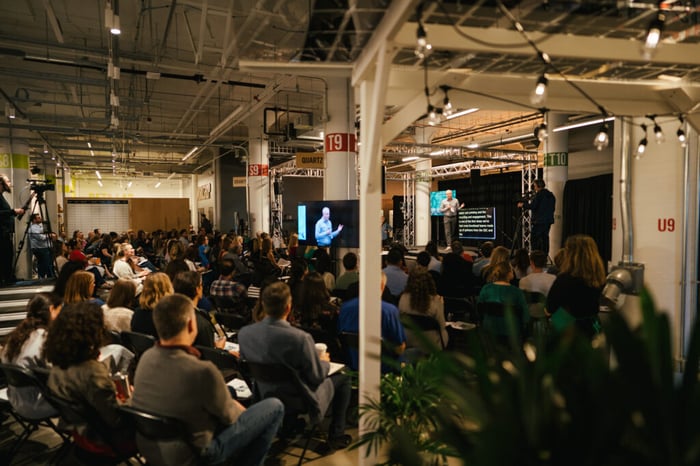 What were the ideas?

The Greener Stores Innovation Challenge does not have to have one winner. Each idea was voted on by a panel of judges with the power to fund trials for any or all of them. The ideas pitched included:

The five teams were selected from 135 entries and flown to the Tryer Center in Seattle. Teams were given help to hone their proposals into a five-minute presentation.

Every one of the ideas presented was given a green light to move into a trial phase. That means that each program will be tested at a handful of stores to see what works and what doesn't.

The competition "is an illustration of a cultural shift – and it's happening in real time," said Starbucks' senior vice president of global public affairs and social impact in a press release. "We're moving at a greater speed of urgency to resolve pain points for partners. Partners are on the front lines of doing the day to day work. This event at Tryer is a moment of listening intensely and then acting with urgency. It's having the partners in the store coach and teach us."

Why is this good for shareholders?

The Tryer Center was designed to get projects from idea to implementation in under 100 days. Since its recent inception, employee involvement has been a big part of that process.

CEO Kevin Johnson has led this initiative, which has included bringing in-store workers into the center for part of their work week. That allows the company to source ideas from people who experience what it's like to actually work in a café. Those people should have greater insight into the pain points for employees and customers, allowing the chain to focus its efforts.

This contest takes line worker involvement even further. It gave regular employees a real chance to be heard and make a difference. That should not only result in some good ideas getting implemented but also improve employee morale.

More companies should listen to their employees -- the people directly serving customers. Starbucks has shown a commitment to doing that, and this contest takes further in a smart way.