Walmart (NYSE:WMT) has been pouring billions into its domestic e-commerce operations for the past three years, since acquiring Jet.com and installing Marc Lore as the head of U.S. e-commerce. It's bought several digitally native brands, including Bonobos and Modcloth, and it's successfully attracted new brands to Walmart.com and created its own brands in-house.

But its online grocery business, a business in place before the Jet.com acquisition, has been the star of the show the last few years. Online grocery helped propel Walmart's U.S. e-commerce business to 40% revenue growth last year, and a similar level of growth will help Walmart reach between $21 billion and $22 billion in online sales this year.

While grocery is a standout winner, Walmart's efforts to capture share of more traditional online purchases have come at a huge cost. The company is set to lose more than $1 billion this year from its U.S. e-commerce operations, according to a report from Recode.

That's the cost of taking on Amazon.com (NASDAQ:AMZN), but there are reportedly detractors within Walmart that aren't willing to keep losing money on e-commerce. 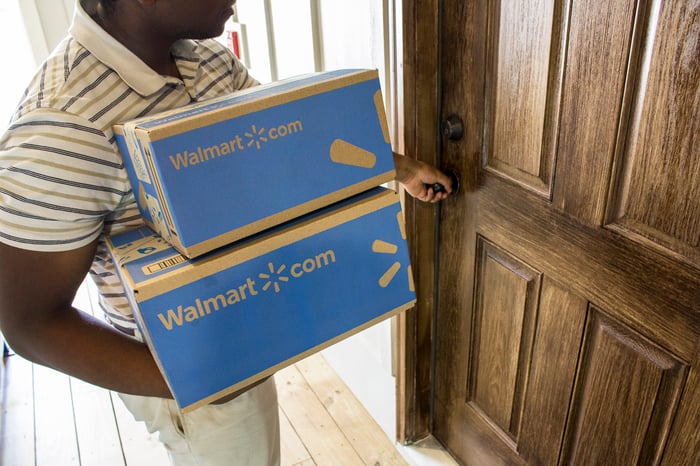 Walmart has been willing to spend hundreds of millions on small e-commerce acquisitions over the past few years, as well as investing in its digital grocery platform and other online shopping endeavors, but management doesn't seem to have a stomach for losses.

Lore has reportedly pushed to expand Walmart's network of warehouses for online orders, but he's met significant resistance from CEO Doug McMillon. Amazon has 110 fulfillment centers nationwide while Walmart has, at most, 20, according to Recode. Building out more warehouses would cost Walmart hundreds of millions of dollars, and it can take a few years from the day a warehouse opens until it's running at full capacity.

Those are long-term investments Amazon is more than willing to make and has been making for 20 years. CFO Brian Olsavsky recently told analysts the company will invest an additional $800 million in the second quarter to improve its fulfillment network to facilitate one-day shipping for the 100 million unique items it currently ships from its warehouses. It's already capable of shipping 10 million different items to customers with a one-day guarantee.

Walmart, meanwhile, has decided to compete with Amazon with its own one-day shipping program, NextDay. The service is rolling out to select metro areas throughout the year, and it'll ship over 200,000 items to customers within 24 hours. Walmart says its strategy of only shipping NextDay orders from a single warehouse and relatively short distances will be more profitable than average online orders.

But Recode's Jason Del Rey points out that the items available through NextDay typically have very thin margins. Even with lower shipping expenses, Walmart will have a tough time generating a profit on NextDay orders.

As part of Amazon's e-commerce shopping spree, it bought several fashion brands, including Bonobos, Modcloth, and most recently Eloquii. It was able to snatch these companies up after they failed to raise another round of venture capital because of slowing sales growth. That strategy seemed unwise at the time, and sure enough, all three businesses remain unprofitable, according to Recode's sources.

To offset the losses of the e-commerce operations, Walmart is looking to sell at least one of the fashion brands, probably ModCloth. And it's not going to get back the $50 million or so it paid for the company.

The one high-growth e-commerce business Walmart acquired, Jet.com, has been scaled back significantly since Walmart bought the Lore-founded company. Walmart only advertises Jet in a few metro areas, and the team is getting folded into the Walmart.com team.

Walmart has spent hundreds of millions on these acquisitions without much to show for them. Not only is its balance sheet missing some cash, but its bottom line is getting hurt as well from the ongoing losses. Meanwhile, Walmart's management doesn't seem willing to invest in those businesses to provide a path to long-term profitability.

Unless Walmart accepts the fact that it needs to invest and lose money now to compete with Amazon long term, it will face a challenge to keep pace with the rest of the market's sales growth and make its online operations profitable.