Dividend stocks might be some of the most loved stocks in the market. Not only are the companies often mature with solid business models and strong cash flow, but they also return value to investors -- rain or shine -- through dividends. What's not to like?

Despite all of the positives of owning dividend stocks, it's still challenging to pick companies that are poised to thrive over the long term. We asked three Motley Fool contributors to help pick out some of their best dividend ideas for July, and they responded with The Children's Place (NASDAQ:PLCE), Crown Castle International (NYSE:CCI), and STORE Capital (NYSE:STOR).

Back-to-school season is just around the corner

Jeremy Bowman (The Children's Place): It's only the beginning of July, and I know most parents and children would rather think of anything but the back-to-school season.

But for retailers, back-to-school is one of the biggest times of the year, and for children's apparel retailer The Children's Place, it's the biggest. This year, there are signs that the company could make it even bigger than normal.

The economy is on fire with stocks at all-time highs and unemployment near record lows. And many Americans have gotten an increase in discretionary income from the Tax Cuts and Jobs Act as the first tax season with the new, mostly lower rates just finished in April. RetailMeNot, an online coupon provider, found that American parents plan to spend $507 on back-to-school items on average this year, up 9% from 2018.

The survey cited the influence of Amazon.com's Prime Day, which has pulled the start of back-to-school season earlier in the year, and created an opportunity across the retail industry as shoppers are on the hunt for deals that week.

More importantly, The Children's Place is without competition from Gymboree, its closest rival, for the first time during back-to-school as that retailer liquidated all its stores earlier in the year. That is expected to weigh on The Children's Place's results through the first half of the year, but the company should be in a much stronger position in the second half, which includes the back-to-school season.

The market has been wary of the stock following its weak first-quarter earnings report in May because of the Gymboree liquidation, but that sets up an opportunity for value-seeking dividend investors, who can capture a 2.3% yield from a discounted stock with a strong record of returning capital to shareholders.

Towering above the competition

Daniel Miller (Crown Castle International): When browsing around for top dividend stocks to buy, a smart place to start is with real estate investment trusts (REITs), which are required to return a minimum of 90% of taxable income to investors in the form of dividends. Let's take a look at Crown Castle, why it has a bright future, and one caveat for potential investors.

While it isn't a household name, chances are if you use a smartphone in the U.S., you've used its infrastructure. It has a portfolio of roughly 40,000 cell towers, 65,000 on-air or under-contract small cell nodes, and 70,000 route miles of fiber. In other words, the company has a collection of attractive assets in every major U.S. market that it rents to major cellphone carriers and other small providers. 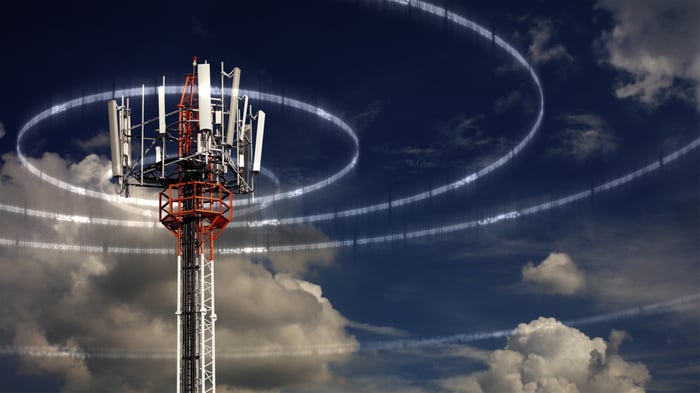 Crown Castle finds itself well positioned as its customers will continue to compete and invest heavily in their 4G networks, which bodes well for its portfolio of towers and fiber. Plus, its future is bright as deployment of 5G accelerates. And while we might think mobile data is already massive, since we all seem to be glued to our phones, Cisco estimates mobile data traffic in the U.S. will explode fivefold from 2017 through 2022.

Not only does Crown Castle find itself in a solid position, since it has already inked price increases in contracts with customers, but it also rewards investors with an enticing 3.4% dividend yield. As more and more devices come online in the years ahead, and the rollout of 5G networks accelerates, it has plenty of growth opportunities. The only caveat for investors is that its bright future has pushed its valuation sky high -- Morningstar.com believes Crown Castle to be trading at a 60% premium. But if management capitalizes on its growth opportunities, it's still a top dividend stock to buy in July.

Brian Feroldi (STORE Capital): E-commerce is a major threat to lots of retailers, especially businesses that sell undifferentiated products at high prices. You might think that would be a long-term headwind for retail-focused REITs like STORE Capital.

It's true that STORE would be badly hurt if it rented its properties to any retailer that asked, but this company is highly selective about whom it chooses to do business with. That protects it from the headwinds that are facing the industry.

So how does this REIT protect itself from e-commerce?

These requirements help explain why the occupancy rate has remained above 99% for years. It also explains why the company has been able to consistently hike its dividend payment each year since it went public.

STORE isn't particularly cheap right now, but it's a high-quality business with a dividend yield of nearly 4%. That should excite any income investor.