It wasn't all that long ago that CRISPR gene editing generated a huge buzz in investing circles. The technology, which uses bacterial enzymes to cut DNA sequences, was hailed as the biggest biotech discovery of the 21st century.

While the buzz has largely died down, CRISPR-based therapies have advanced farther than ever before in treating diseases. Editas Medicine (NASDAQ:EDIT) ranks as the second-largest biotech by market cap that's focused primarily on CRISPR gene editing. Is Editas a stock that long-term investors should consider buying right now? 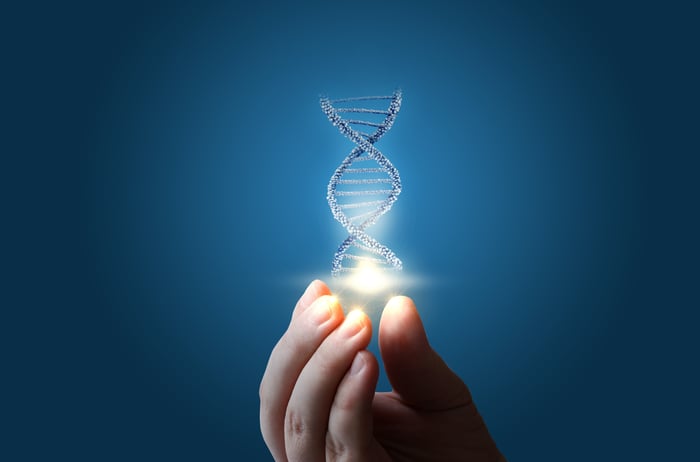 You won't have to look hard to find reasons to stay away from Editas Medicine. For starters, the company isn't anywhere close to profitability. Editas lost $29 million in the first quarter of 2019. Since beginning operations in 2013, the biotech's cumulative losses total more than $445 million.

Despite its dismal bottom line, Editas' market cap stands close to $1.2 billion. You might think that this implies optimism among investors that the company could be on the verge of making a lot of money in the near future. Nope.

Editas' lead candidate, EDIT-101, is entering phase 1 clinical testing in the second half of 2019. What are the odds that a drug in a phase 1 clinical study will go on to win Food and Drug Administration (FDA) approval? Less than 1 in 10, based on historical results.

EDIT-101 targets the treatment of Leber's congenital amaurosis type 10 (LCA10), the leading genetic cause of blindness. But Editas isn't the only biotech hoping to treat LCA10. ProQR Therapeutics is ahead of Editas. ProQR is currently evaluating experimental RNA-based therapy sepofarsen in a phase 2/3 clinical study as a treatment for LCA10.

Aside from the uphill climb that Editas faces to achieve commercial success, the company has had a concerning amount of turnover in its executive ranks. In December 2018, Editas' CFO Andrew Hack surprised shareholders by announcing he was leaving the company to return to the investment industry. Only a month later, Katrine Bosley unexpectedly stepped down as CEO, causing Editas stock to crash.

But a lot of potential, too

With all of those negatives, why would anyone consider buying Editas Medicine stock? Because the biotech has tremendous potential.

It's usually a good sign when a big drugmaker ponies up a lot of money to partner with a small biotech. That's exactly what happened for Editas in 2017, when Allergan (NYSE:AGN) paid $90 million upfront for the option to license up to five of Editas' eye-disease programs. Allergan exercised its option to develop and commercialize EDIT-101 for treating LCA10 last year, with Editas receiving another $15 million.

While Editas has a long way to go, the biotech should soon make history with the first in vivo (in the body) human testing of a CRISPR gene editing therapy. Based on the results from preclinical testing, there's reason for cautious optimism about the prospects for EDIT-101 in treating humans with LCA10.

If EDIT-101 proves to be successful in clinical studies, Editas should have at least one key advantage over ProQR's LCA10 therapy -- assuming it also goes on to win regulatory approval. Sepofarsen will have to be administered to patients on an ongoing basis, but EDIT-101 will require only a one-time treatment.

Editas also has plans to advance other CRISPR therapies. The company expects to have a lead candidate targeting the treatment of another genetic eye disease, Usher syndrome type 2a, ready by the end of 2019 for studies that would set the stage for advancing to clinical testing in humans. Editas is also close to selecting its candidate for using CRISPR gene editing to treat rare blood disorders sickle cell disease (SCD) and beta-thalassemia.

Editas claims another major partner in Celgene. The big biotech is working with Editas to use CRISPR to edit T cells for targeting cancer.

Editas arguably has the strongest intellectual property portfolio in the CRISPR world. In 2014, the biotech exclusively licensed CRISPR-Cas9 intellectual property owned by the Broad Institute and Harvard University. It's possible that other companies will have to pay Editas for developing and commercializing therapies using CRISPR that target the same indications that Editas researches.

Is Editas a stock to buy right now? The answer is probably no for most investors. There are so many risks for Editas that its stock remains highly speculative.

I personally own Editas shares, though. My investing style is aggressive, and I don't mind having a few speculative picks in my portfolio. For investors who are of a like mind and aren't afraid of rolling the dice on a high-risk yet potentially high reward opportunity, Editas Medicine is definitely a stock to consider.