It wasn't long ago that Advanced Micro Devices (NASDAQ:AMD) was so far behind market leader Intel (NASDAQ:INTC) in the PC CPU market that a comeback looked like a pipe dream. Before the first generation of AMD's Ryzen processors launched in early 2017, Intel had a massive edge in single-threaded performance that appeared almost untouchable.

Solid performance is only part of the story; AMD's pricing on these new chips undercut Intel. While Intel appears to maintain a small advantage in single-threaded performance, AMD wins easily when it comes to value. 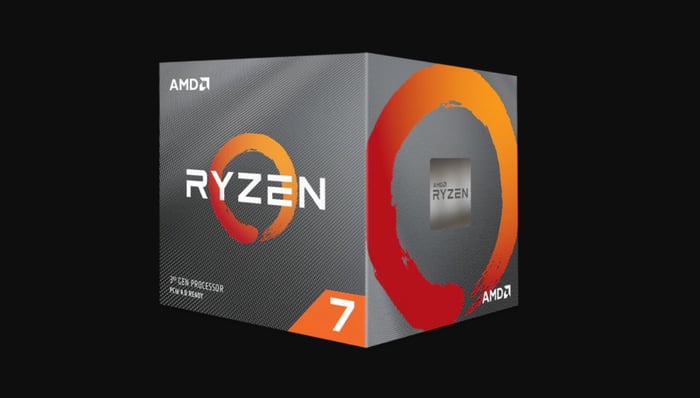 AMD launched five new chips as part of its third-gen Ryzen launch, ranging in price from $199 to $499. A higher-end $749 chip is set to arrive in September.

One thing to note: AMD's new chips include a cooler, while the two Intel chips do not. A cooler isn't all that expensive, but it's an additional cost for anyone buying Intel's chips.

Because the 3900X has 50% more cores and threads than the 9900K, it trounces Intel's chip in tests where all those cores can be used. When it comes to applications like CPU rendering and video encoding, the 3900X reigns supreme. Even the 3700X comes close to beating the 9900K in some cases.

AMD's chips perform well in other nongaming tasks, although Intel still comes out on top in some cases. AnandTech found that Intel chips still have an advantage in single-threaded performance, but that advantage is now only a few percent.

In gaming, Intel's chips come out on top, but the performance gap is no longer very big. "Ryzen CPUs are no longer something to be dismissed if you want to have a high-end gaming machine," concluded AnandTech's review of AMD's new chips.

Beyond raw performance, AMD has made huge gains in power efficiency thanks to a new architecture and the move to a 7nm manufacturing process. AnandTech found that the 3700X consumes about 90 watts of power under full load, well below the 124 watts consumed by the 9700K. The 3900X uses 142 watts of power, below the 168 watts required by the 9900K.

AMD has a winner on its hands

For PC gamers, AMD's 3700X is an enticing proposition. It can't quite match the 9700K in gaming performance, but it's cheaper, doesn't require the additional purchase of a cooler, and is quite a bit more power efficient.

The 3900X is compelling for any user that can take advantage of 12 cores and 24 threads. "The 3900X essentially has no real competition when it comes to the multi-threaded performance that it's able to deliver," reads AnandTech's review.

It's been more than a decade since AMD's CPUs have come this close to Intel-level performance. Price cuts from Intel wouldn't be too surprising here, given that it's clearly losing on the value front. Gamers looking for the absolute best regardless of price will still opt for Intel, but AMD has provided a genuine alternative with its third-gen Ryzen chips.