MercadoLibre (NASDAQ:MELI) offers investors a way to invest in one of the fastest-growing e-commerce markets in the world. The company has 280 million registered users out of 644 million people who live in Latin America.

The stock has soared 543% in the last five years, which may leave investors wondering whether it's still a buy. We'll take a look at four reasons why MercadoLibre is a worthy growth stock to consider, but the main drawback is that the valuation looks frothy at these price levels. 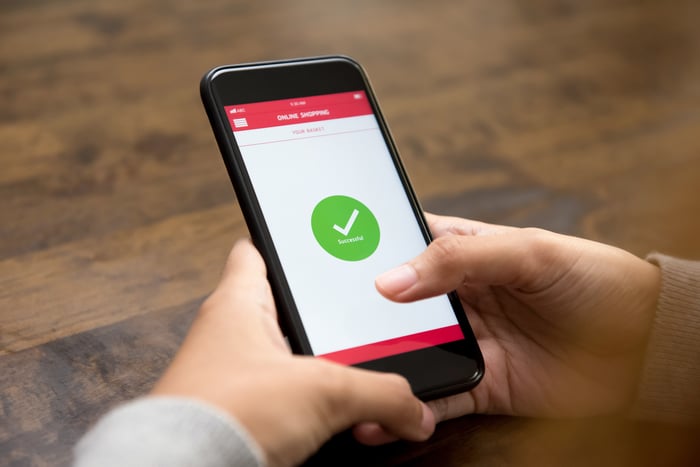 MercadoLibre is an e-commerce juggernaut in the making. Revenue tripled over the last five years to reach $1.59 billion, which in a region with 644 million people doesn't seem like a lot.

The company got off to a fantastic start in 2019, with revenue increasing 48% year over year in the first quarter. But since MercadoLibre stock is listed on a U.S. exchange, it must report its results in U.S. dollars, which can mask how fast the company is really growing.

One of the downsides of investing in the stock is that MercadoLibre has a shaky history of reporting a profit, but that's due to investments to drive growth. 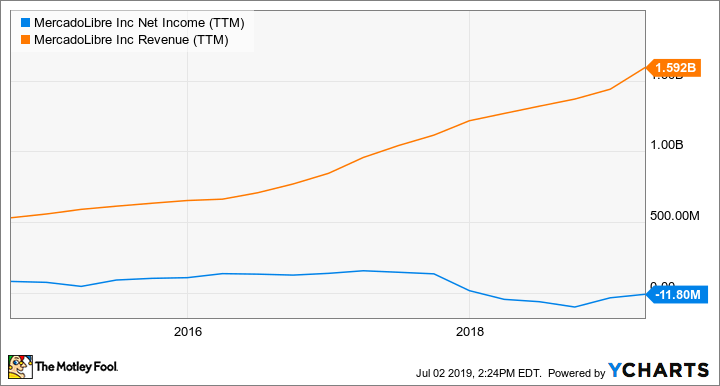 However, last quarter, Mercado squeezed out a small profit of $11.9 million, or $0.13 per share. The small profit was a result of a decrease in salaries, marketing, and other expense items. CFO Pedro Arnt said that the bump in profit gives them confidence in their ability to "dial up, or down" the profit levels as they see fit.

Based on Arnt's comment, MercadoLibre is likely capable of generating much more profit than it's been reporting to investors.

3. The hottest mobile payments company in the world?

The "eBay of Latin America" is now the PayPal of the region, too, thanks to enormous growth happening in the MercadoPago payments business.

Off-marketplace payments now represent 45% of the company's total payment volume, and management sees high penetration trends happening in certain markets, such as Argentina and elsewhere, that should push that percentage higher.

MercadoPago got an adrenaline boost recently with the investment of $750 million from PayPal. The deal will bring the two companies together to work on the shared mission to digitize the economy, especially for the underbanked, in Latin America. It's a testament to Mercado's brand recognition in the region that PayPal chose to invest in the company instead of competing.

4. The marketplace is still growing fast

Management is focusing on category expansion to drive growth in the marketplace and is also expanding logistics capacity for MercadoEnvios, where the company offers a fulfillment service for sellers.

The company cited supermarket items in Mexico and increasing apparel selection as two areas that are showing strong results. Apparel is the fastest-growing category, up 79% year over year last quarter.

With the expansion going well in new categories and the company expanding its logistics footprint, it seems the marketplace still has a lot of room to run.

Check the price tag before buying

MercadoLibre is proving it can expand beyond the marketplace business to become a formidable fintech company. As it expands into other services, Mercado is cementing its brand across Latin America. Even as Amazon.com enters the territory, Mercado's acceleration in growth over the last year tells investors that it is in full control of one of the fastest-growing internet populations in the world. That's one reason why the stock has doubled over the last year.

But the recent surge in the stock price has left the valuation in nosebleed territory. It's tough to get a handle on the value because of the company's lack of profitability historically. However, analysts expect the company's adjusted (non-GAAP) earnings per share to improve to $1.24 this year and $3.53 in 2020. But that still leaves the stock trading at an expensive forward P/E multiple of 175 based on next year's earnings estimate.

The company is growing so fast that I believe MercadoLibre can grow into its valuation, but investors should be aware that other e-commerce stocks offer good growth prospects without a triple-digit earnings multiple, such as PayPal.

I like the growth story here, but I wouldn't want to buy the stock at these highs. Investors should keep this one on their watch lists and consider taking the plunge if the stock pulls back.

Is MercadoLibre a Buy? @themotleyfool #stocks $MELI Next Article
Current