These efforts, which are focused on spending efficiencies and balance sheet improvements, will help McCormick improve its earnings capacity over the next several quarters. Below, let's consider three important items Smith discussed. 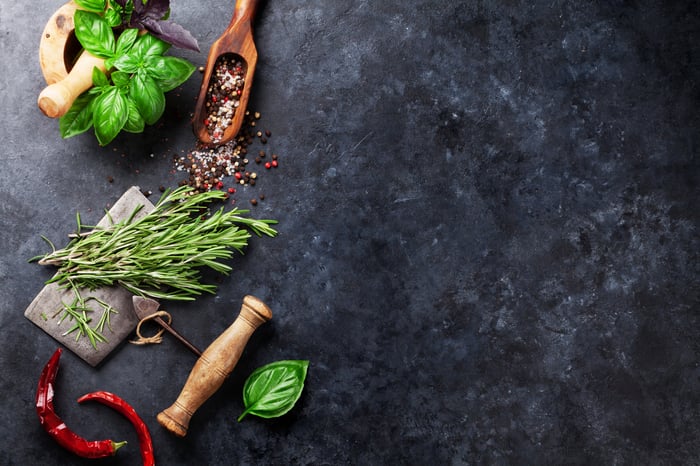 1. It's pushing to reduce working capital

Given that working capital (current assets like cash and inventory reduced by current liabilities like accounts payable and short-term debt) is what companies deploy to fund their ongoing operations, why would any organization focus on shrinking, rather than expanding it?

The concept here is one of finding the right balance. Having too much working capital on hand can reflect an inefficient use of assets. Excess cash balances (beyond what's needed to meet current obligations) should typically be used for fixed-asset purchases or moved to higher yielding short-term investments. Companies strive to avoid keeping too much inventory on hand due in part to carrying costs that can tie up capital.

"As we execute against programs to achieve working capital reductions, including inventory management programs, we continue to see improvements in our cash conversion cycle, finishing the second quarter down six days versus our fiscal year-end,"  said Smith.

Working capital can be optimized in several ways; for example, by collecting receivables faster, by slowing the pace of disbursements, or by speeding up inventory turnover. The cash conversion cycle Smith refers to is defined as the amount of time it takes for a company to convert its investments in inventory into sales, and then into cash as receivables are collected.

Speeding up the cash conversion cycle may not be as glamorous as acquiring new brands or launching products, but it's an excellent way to reduce working capital -- and increase cash flow.

2. It's trimming debt in order to reload

"As we have maintained our disciplined acquisition strategy with a focus on paying down debt, we finished the second quarter with a debt-to-adjusted-EBITDA ratio below four times, which is pacing us ahead of our target of three times by the end of 2020. So as [CEO Lawrence Kurzius] mentioned during the first quarter earnings call, while our priority is paying down debt, it is also time for us to start exploring acquisition opportunities which represent a key part of our long-term growth strategy." -- Smith

By adding RB Food's popular brands like Frank's RedHot Hot Sauce and French's Mustard to its portfolio, McCormick enhanced its reach and provided significant diversification beyond the its core spice and flavorings businesses. The long-term potential of these labels under McCormick's aggressive efforts to expand its share of grocery shelf space is one of the primary reasons investors have rewarded the "MKC" symbol handsomely since the acquisition.

Below is a chart of McCormick's total return performance to date against peer multinational consumer packaged goods (CPG) conglomerates since the RB Foods acquisition closed on Aug. 17, 2017. The stock trajectory demonstrates how much investors have endorsed the strategic fit of the RB Foods transaction. 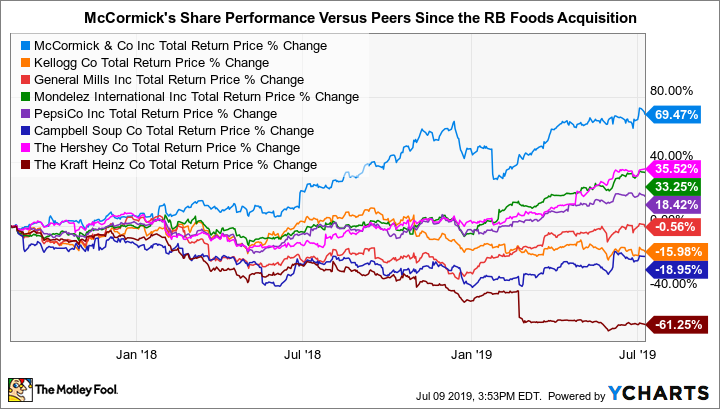 The leverage that Smith mentions -- a debt-to-adjusted-EBITDA ratio under 4 -- is considered moderate. That level of borrowing will permit the company to tap the debt markets for significant funding should it find another appealing acquisition that would complement either its core businesses or its newer condiments segment. As Smith signals, McCormick is already in search of its next acquisition target.

3. It's applying "CCI" to marketing

Our selling, general and administrative expense as a percentage of net sales decreased by 50 basis points from the second quarter of 2018. This decrease was primarily driven by lower brand marketing investments, which, as Lawrence mentioned earlier, is partially driven by timing. And through our new marketing excellence organization, we are increasing our efficiency and speed as well as realizing brand marketing CCI through the creation of in-house services and consolidated media buys.

McCormick has dubbed its ongoing productivity program "Comprehensive Continuous Improvement," or CCI. Investors associate the program with cost-cutting and initiatives like supply chain improvement and vendor negotiations. Over the last four years, McCormick has averaged $110.5 million in CCI savings annually, and it's targeting $110 million in efficiencies this year.

However, CCI is more than a manufacturing cost-cutting exercise: It's a philosophy that can be applied to a range of different programs within the operation. As I've previously discussed, McCormick is attempting to make its annual marketing spend more efficient by holding 2019's expenditures to 2018 levels, and focusing on innovative methods to produce a greater yield from each marketing dollar.

Utilizing CCI processes and methods in this effort showcases McCormick's desire and potential to continue to advance profitability, even in periods -- like the current one -- of middling revenue growth. It also suggests that the company can spread CCI techniques to other areas of general and administrative expense. A firm focus on margin improvement is one of the primary reasons investors have continued to bid up McCormick shares this year, even as revenue growth has temporarily stalled.