The back-to-school shopping season is always an important time of year for Apple (NASDAQ:AAPL), and the Mac maker has just simplified its notebook lineup for the occasion. The company announced today that it is refreshing its MacBook Air and MacBook Pro offerings, including some pricing tweaks that may help spur sales.

In the process, Apple is killing off the ultra-portable 12-inch MacBook and non-Retina MacBook Air. 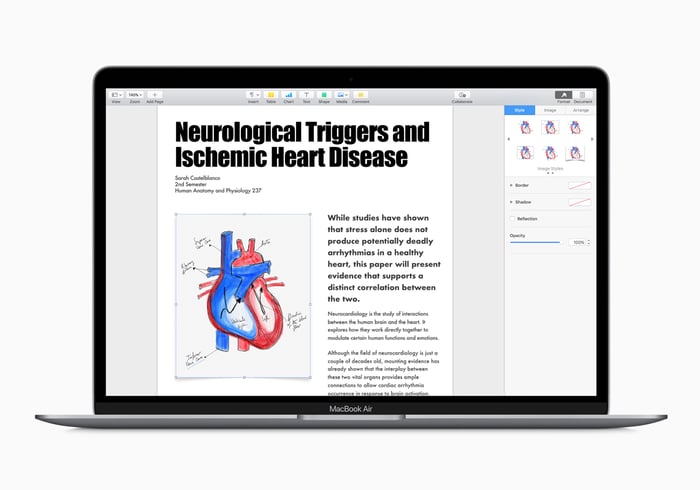 MacBook Air gets even more affordable

In terms of specs, the MacBook Air's display is getting True Tone, Apple's technology that adjusts the color temperature of the screen based on ambient lighting conditions. The tech titan is also dropping the entry-level price from $1,200 to $1,100, with students getting a $100 discount that brings the price tag to $1,000.

The 13-inch MacBook Pro is getting beefier quad-core processors, and Apple is adding the Touch Bar to the base $1,300 model. Previously, the base model featured standard function keys, a configuration that is getting discontinued. All MacBook Pro laptops will now have a Touch Bar, for better or for worse. Originally billed as a revolutionary new interface, the Touch Bar has since been criticized as a gimmick.

Apple notes that the MacBook Air and 13-inch MacBook Pro are the most popular laptops for students, which is why it's focusing the updates on those models. Students also get a free pair of Beats headphones as part of Apple's annual back-to-school promotion, which Apple has done every year since acquiring the headphone maker in 2014.

The MacBook lineup was becoming a bit overcrowded. After the redesigned MacBook Air was launched last year, the 12-inch MacBook's value proposition was getting a little questionable. It cost even more than the MacBook Air, had an older version of Apple's beleaguered butterfly keyboard, and lacked Touch ID. On top of that, Apple was still selling the ancient non-Retina MacBook Air for some reason. Discontinuing both of those laptops will streamline the portfolio and make purchasing decisions easier for consumers.

9to5Mac also notes that Apple is cutting prices across the board for SSDs, which are often among the most expensive upgrades. That reflects what's been happening in the memory market all year, with NAND prices plummeting precipitously. Memory prices may be bottoming out now, though, which could pressure gross margin.

The Mac business hit a snag last quarter, with revenue declining to $5.5 billion. CEO Tim Cook blamed the shortfall on "some processor constraints" from Intel, and said revenue would have been up if it hadn't been for supply constraints. Revenue should be able to bounce back as those constraints ease, and Apple cutting prices won't hurt, either.