Some Americans were outraged to learn Nike (NYSE:NKE) yanked its Air Max 1 USA sneakers just before they were supposed to hit the market ahead of the July 4 holiday. Controversial ex-football player Colin Kaepernick, whom Nike hired as a company spokesman, had reportedly expressed concerns about the symbolism of the flag logo on the sneakers: a design with 13 stars in a circle often attributed to colonial seamstress Betsy Ross.

But Nike's target demographic is not necessarily the same people who are upset by the move, and the market it was trying to sell the sneakers to will likely respond favorably. Although the footwear company will take a small financial hit from the costs associated with manufacturing the limited-edition shoe, and lose $1 million in financial incentives after Arizona moved to block the tax monies it was going to receive for siting a factory in the city of Goodyear, the brouhaha will only be a glancing blow.

Other states are already jumping at the chance to have Nike locate a factory within their borders -- both New Mexico and California have said they'd welcome the company -- and given Nike's $39 billion in annual revenue, the Arizona grant is really inconsequential. Instead, it will have gained additional credibility with its core audience after the dust settles. 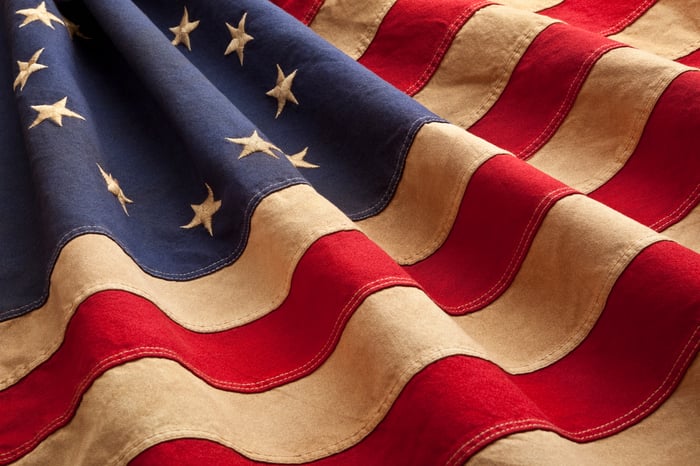 Nike actively courts controversy and seemingly operates under the apocryphal P.T. Barnum bromide that there is no such thing as bad publicity. It ran ads featuring professional cyclist Lance Amstrong after his doping scandal, tennis great Maria Sharapova after she failed a drug test, and golfing legend Tiger Woods during his high-profile divorce and arrest for driving under the influence of drugs.

Hiring Kaepernick and featuring him last year in a major advertising campaign that recalled the ex-footballer's decision to kneel during the National Anthem therefore seems to fall in line with the company's flashy -- and oftentimes risky -- attention grabbing efforts. It's also a successful tack, one that benefits the company's bottom line.

Analysis following the launch of the Kaepernick ad over last year's Labor Day weekend showed Nike sales soaring 31%, compared to a 17% increase the year before. And sales were up 7% for the apparel company's fiscal 2018 year that ended May 31, in results released just prior to the sneaker controversy. Profit margin also rose, and net income of $4 billion for the year was double the $1.9 billion reported in 2017.

Giving customers what they want

Nike had been quietly removing the "Betsy Ross" flag sneakers from the market, though The Wall Street Journal reported the shoes had been shipped to retailers before it asked for them to be returned.

Although controversy erupted on social media, the people criticizing Nike's actions likely aren't buying the sneakers to begin with, so calls for boycotting the company will have little impact. It was much the same after Nike first hired Kaepernick as an advisor: Sales actually went up in the aftermath.

More importantly, having hired Kaepernick to advise the company, Nike may well have suffered a bigger, more financially significant backlash among actual customers if it had ignored him.

While one can debate whether the handiwork of a colonial seamstress is a symbol of oppression -- especially since Nike also makes the jerseys for the National Basketball Association's Philadelphia 76ers, which incorporate the "Betsy Ross" flag logo, and no one seems to feel oppressed because of it -- Nike won't suffer any lasting consequences from siding with those who oppose the sneakers.

They were also a limited edition, not a wide run, so even the financial hit from recalling them won't be severe.

Onto the next brouhaha

Nike's stock also doesn't suffer any lasting hurt from its controversies, although it inevitably drops a few points immediately after one arises. Shares of the apparel company are up 16% year to date, and have more than doubled over the past five years.

While rivals like Adidas or Under Armour may get a brief bounce if consumers flock to their brands in protest, consumers will soon move on to the next outrage du jour. Nike will move forward, and see sales rise further still.