Please ensure Javascript is enabled for purposes of website accessibility
Log In Help Join The Motley Fool
Free Article Join Over 1 Million Premium Members And Get More In-Depth Stock Guidance and Research
By Jeremy Bowman - Sep 5, 2018 at 10:38AM

Investors focused on the backlash are overlooking a major constituency that may support the move.

The backlash against Nike (NKE 2.93%) was probably predictable after it put controversial quarterback Colin Kaepernick at the center of a new ad campaign, celebrating the 30th anniversary of the company's "Just Do It" motto.

Believe in something, even if it means sacrificing everything. #JustDoIt pic.twitter.com/SRWkMIDdaO

Protesters took to social media, swearing off supporting the ubiquitous sneaker brand, and trashing Nike for its embrace of Kaepernick, the quarterback who began protesting the treatment of minorities by kneeling during the national anthem back in August 2016 and has since been exiled by the NFL.

Our Soundman just cut the Nike swoosh off his socks. Former marine. Get ready @Nike multiply that by the millions. pic.twitter.com/h8kj6RXe7j

Nike stock closed down 3.2% Tuesday, a sign investors were wary of the uproar.

But plenty of Nike customers also took to social media to defend Nike and Kaepernick. The NFL protests have long been a divisive issue, an episode in so-called culture wars, and they have frequently drawn the ire of President Trump, who has bashed the protesting players on multiple occasions.

Beyond the repulsion or inspiration Nike just sparked in its customer base, the move is likely to curry favor with another key constituency for the sports giant: the players.

The NFL Players Association, the labor organization representing the players, has fought the league multiple times over its members' right to protest. In July, the NFLPA filed a grievance against the league, insisting that the anti-kneeling policy infringes on players' rights.

The NFLPA tweeted a fist and 100 emoji, saluting Nike's new campaign with Kaepernick shortly after the news broke.

At least 200 NFL players have taken a knee during the national anthem, following Kaepernick's lead after he chose to kneel in protest of violence against people of color. Others have locked arms during the anthem in a show of solidarity.

While individual players did not comment on Nike's decision to tap Kaepernick for its new campaign, it's likely the vast majority would support the move, as the support from the NFLPA indicates.

Therefore, the new Nike campaign isn't just a move that aligns with a social justice movement and fans of Kaepernick and the players' right to protest, it's also likely to ingratiate the brand with the players, making it easier for Nike to attract big-name endorsements, the lifeblood of sports marketing.

One up on Under Armour

Nike's recent move draws a sharp contrast with statements by Under Armour (UA 4.40%) (UAA 4.40%) CEO Kevin Plank last year, when he aligned himself with President Trump shortly after the inauguration. At a time when Trump was immersed in controversy following the chaotic implementation of the administration's travel ban, Plank called Trump a "real asset for the country," citing his business experience and business-friendly policies. Plank was immediately confronted with a backlash of his own making as fans threatened to boycott the brand. NBA star point guard Stephen Curry of the Golden State Warriors and Under Armour's marquee star, pushed back against Plank, saying that Trump was an asset if you take off the last two letters from the word. Actor and retired professional wrestler Dwayne "The Rock" Johnson expressed a similar sentiment.

Plank and Under Armour were eventually forced to issue a statement distancing the company from Trump that instead embraced diversity and Under Armour's core values. That summer, Plank stepped down from a Trump advisory board and his association with Trump was one of many issues that plagued the brand that year.

Under Armour stock lost 50% in 2017, and Plank's statements didn't help the company's struggles to cross over and become a streetwear brand, or to build a meaningful basketball brand around Curry.

Nike, meanwhile, seems to understand that at least some of its customer base is likely to approve of its support of Kaepernick. According to research firm NPD, two thirds of Nike's customers are under 34, and 45% are younger than 25, and younger Americans tend to lean further to the left politically and empathize with social justice causes.

No stranger to activism

Though there's backlash toward this particular advertisement, Nike is no stranger to activism or tying its brand to social justice movements. At the time when Under Armour CEO Plank was putting his foot in his mouth, Nike launched its own "Equality" campaign, featuring actor Michael B. Jordan saying lines like, "Here within these lines, on this concrete court. This patch of turf. Here, you're defined by your actions. Not your looks or beliefs."

Nike has long sought to connect sports to something deeper that draws people together, to encourage them to overcome obstacles, to inspire. In a memorable 1995 campaign, Nike released an ad titled, "If You Let Me Play," that was a call to arms for girls to play to sports and to not only be allowed but encouraged to do so.

In another famous Nike commercial from the same era, Charles Barkley, underscoring the importance of parents, teachers, and other such pillars of communities, declared, "I am not a role model."

Last year, Nike released a performance hijab for female Muslim athletes, focusing on a historically overlooked demographic. Other examples abound of the company embracing diversity or lifting up disadvantaged groups.

Still, Nike's embrace of Kaepernick is risky; no prior move from the company has sparked such a backlash. But it's becoming more commonplace for athletes and other stakeholders in the sports world to take a stand on political issues. NBA players, including Kobe Bryant, wore shirts that said, "I can't breathe," after the death of Eric Garner in New York. LeBron James, perhaps the most famous American athlete, has embraced politics and activism, endorsing Hillary Clinton for president in 2016 and opening up a charter school in his hometown of Akron, Ohio. Tennis star Serena Williams, another Nike sponsor and maybe the most famous female athlete in the world, has made statements about equality and police brutality. She also recently offered support to Kaepernick on the new Nike campaign. 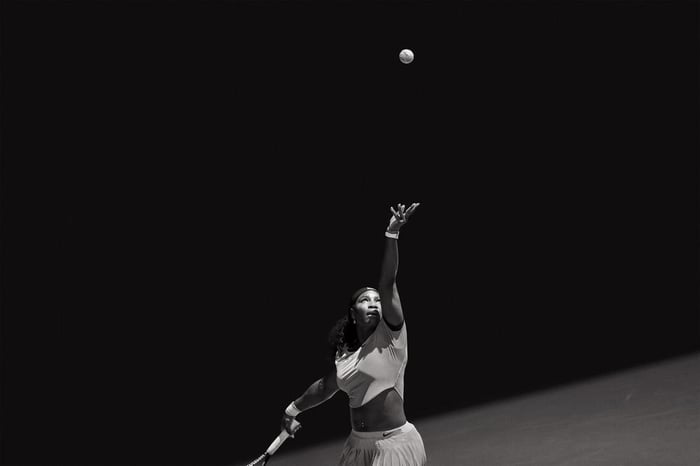 Other companies have also waded into activist politics in a new way. For example, when North Carolina passed an anti-LGBT bill in 2016, organizations including the NCAA, Deutsche Bank, and PayPal ditched plans they had to expand in the state.

In other words, Nike's move with Kaepernick is keeping with the times and is in step with Nike's historical brand. Though it's never a good thing to lose customers, the decision seems likely to pay off over the long run.

Keeping athletes on its side is key for Nike, especially with Under Armour and Adidas nipping at its heels. Standing by Kaepernick, who has been cast aside by the NFL, is one way to show its support for athletes around the world and the causes for which they stand.