Shares of Chipotle Mexican Grill (NYSE:CMG) were rolling higher again last month, tacking on 11% according to data from S&P Global Market Intelligence, and capping off a 70% surge for the first half of the year.

Chipotle came into the month on a downswing as the stock dipped at the end of May and in the first trading session of June on fears about President Trump imposing tariffs on Mexico. However, shares suddenly reversed course as the macroeconomic news started to favor Chipotle. Toward the end of the month, the company also got a positive analyst rating, helping its case. 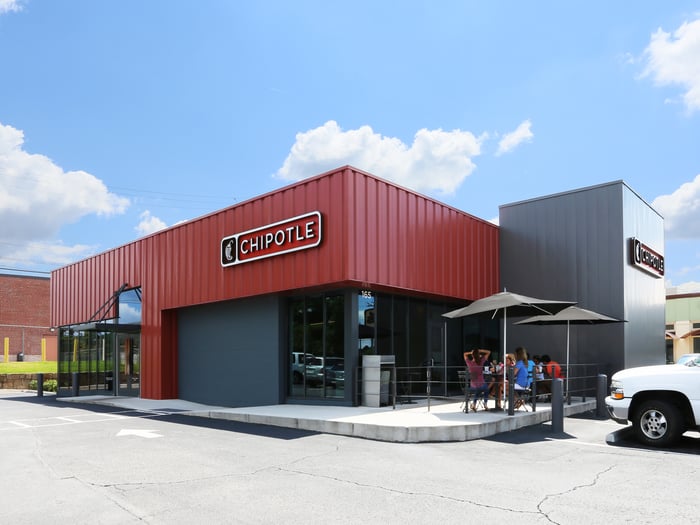 As you can see from the chart below, the stock's rise came almost entirely in the first week of the month. 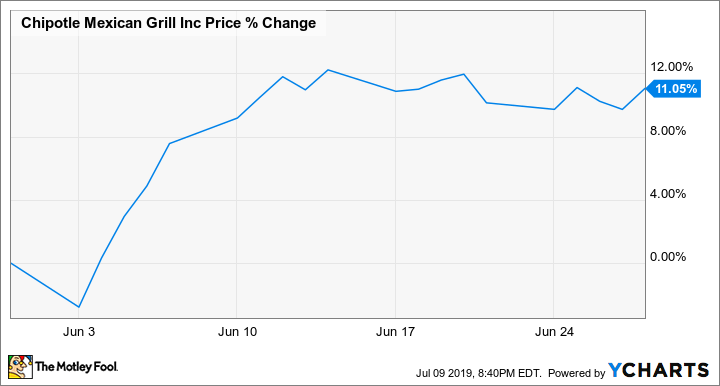 Chipotle investors had initially feared the threat of tariffs on Mexico as the company said it would have to raise prices on burritos by a nickel in order to accommodate the import taxes, and reconsider its supply chain for products like beef.

However, the stock then ran up 15% over the next seven sessions as it first got a boost from Federal Reserve Chair Jerome Powell, who said the central bank would be willing to lower interest rates if a trade war broke out or the economy slowed, giving some cover to stocks like Chipotle that would face higher costs on tariffs on Mexico. Later that week, President Trump backed off of the Mexican tariff threat, after he said the two sides had reached an agreement to mitigate the influx of illegal immigrants into the U.S., his original reason for proposing tariffs.

Later in the month, Chipotle got a boost from Credit Suisse after analyst Lauren Silberman initiated coverage with an outperform rating and a price target of $870, saying that Chipotle was becoming a growth story rather than a recovery story, and that its digital initiatives and investments were paying off. The stock added 1.3% on the report.

Chipotle shares have continued to rise in July as investor enthusiasm has returned to the stock after two strong earnings reports to start the year, and as new CEO Brian Niccol has shifted the company's focus to digital initiatives like mobile ordering through its app and delivery through a partnership with DoorDash. As a result, the stock has come within breathing distance of its all-time high of $757 that it reached in October 2015 before the E. coli outbreak killed the company's sales.