Shares of Applied Materials (NASDAQ:AMAT), the world's largest semiconductor equipment company by revenue, rose 16.1% in June, according to data provided by S&P Global Market Intelligence. But this double-digit increase came on the heels of a disastrous May, in which shares plunged 12.2%. Overall for the year, Applied Materials shares are up 34%.

The stock's performance is largely tracking the overall semiconductor industry, as measured by the PHLX Semiconductor Index, which was up 12.6% in May, down 16.7% in April, and is currently up 26.3% for the year. Applied Materials has been slightly outperforming the index so far this year. That's a change from 2018, when its 36% drop far underperformed the index, which only lost 7.8%.

There's a couple of reasons for Applied Materials' recent outperformance. Although the company's Q1 results, released in mid-May, were underwhelming, they surpassed Wall Street's expectations. And even though the past few quarters have caused some concern, revenue and net income are both near the company's record highs, set last year: 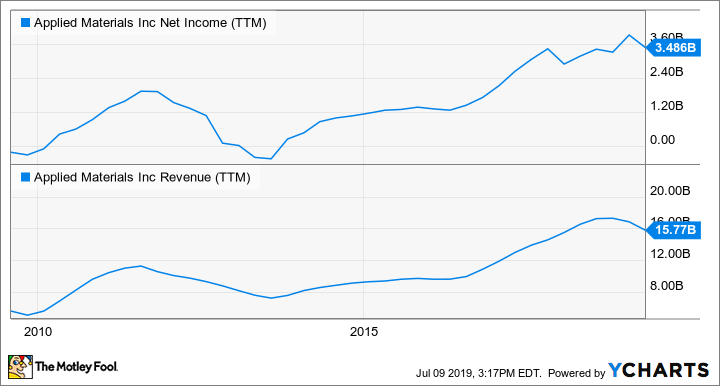 This state of affairs seems to be giving investors confidence that the industry -- and Applied Materials in particular -- will shake off the doldrums and return to growth. The company officially upped its quarterly dividend in June to $0.21 a share, which may have further cheered investors.

Especially as new technologies like 5G, autonomous driving, and artificial intelligence require new and more complex computer chips, the semiconductor industry as a whole has big growth potential. If Applied Materials can capitalize on that, it should be in excellent shape.

With Applied's current dividend yield of about 1.8% and a P/E of 12.3, which is well below its historic range, investors who are excited by the long-term prospects of the semiconductor industry may want to take a closer look. But be aware that there could be continued volatility in the near term: The future isn't upon us just yet.