Tesla (NASDAQ:TSLA) is "making preparations" for higher production at its car factory in Fremont, California, the company's automotive president, Jerome Guillen, said in a leaked email (via Bloomberg) this week. Guillen, however, refrained from providing specifics as to why Tesla expects to increase output, suggesting the automaker may have a surprise in store.

The email, which also included some upbeat news on the company's recent production levels, arrived in the news at a moment when the electric-car company is achieving record sales, and aiming for even higher delivery numbers in the second half of the year. 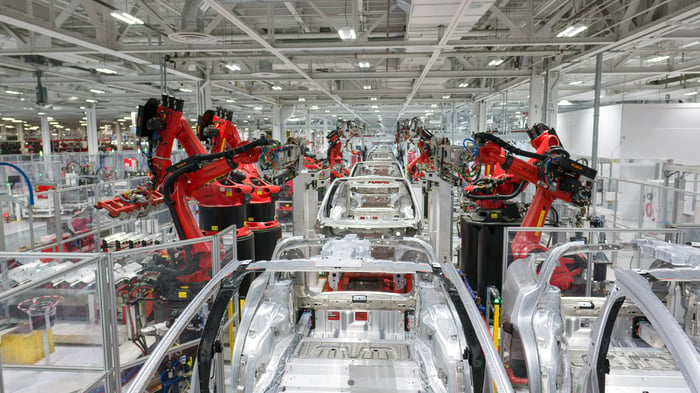 Regarding Tesla's "preparations" to increase output in Fremont, Guillen wrote, "While we can't be too specific in this email, I know you will be delighted with the upcoming developments."

In addition, he told employees that the company is hiring. "As we continue to ramp up production, please tell your friends and neighbors that we have lots of exciting new positions open, both in Fremont and at [the Gigafactory in Reno, Nevada]," the executive wrote in the email.

The executive's reference to a hiring spree suggests the news could be meaningful -- though it could be mostly related to Tesla's current operations as it continues to accelerate Model 3 production.

Early production of a new vehicle is a possible (but unlikely) explanation for the expected output increase. Tesla wasn't planning on shipping the first Model Y SUVs until fall of next year. In addition, Tesla said in its first-quarter earnings call in April that production of its all-electric semi-truck won't start until sometime in 2020.

Guillen also offered praise for the company's second-quarter production achievements, noting that Tesla "hit new records in all production lines for output and efficiency." In addition, he said quality at both its car factory and battery factory is "reaching record highs."

The combination of his optimism and Tesla's higher-than-expected Q2 deliveries suggests the electric-car maker is on track to hit its full-year guidance for 360,000 to 400,000 deliveries -- a growth range of 45% to 65%. So far this year, Tesla has delivered 158,000 vehicles, with about 95,000 of those deliveries occurring during Q2. To hit the low end of its 2019 outlook, Tesla will need to deliver more than 200,000 vehicles during the second half of the year.