Please ensure Javascript is enabled for purposes of website accessibility
Free Article Join Over 1 Million Premium Members And Get More In-Depth Stock Guidance and Research
By Daniel B. Kline - Jul 11, 2019 at 5:36AM

The Tie-Dye Frappuccino looks a lot like another popular limited-time-offer beverage.

While Starbucks ( SBUX -0.16% ) isn't introducing new novelty beverages as frequently as it once did, it certainly hasn't stopped creating them. Its latest limited-time offer (LTO), the Tie-Dye Frappuccino, came out July 10, and it will be on the menu until supplies run out.

The concoction shares a lot of its sugary DNA with the company's standard-bearer in the LTO category: the Unicorn Frappuccino. That colorful drink became a cultural phenomenon, luring in younger customers and enticing many people who rarely visited the chain otherwise to come sample it.

In the more than two years since the Unicorn Frappuccino came out, Starbucks has been chasing its success with a variety of related releases, but it has been unable to recreate the intensity of that original craze. Now, the company hopes that making LTOs a bit more of a rarity will draw more attention to its latest offering. 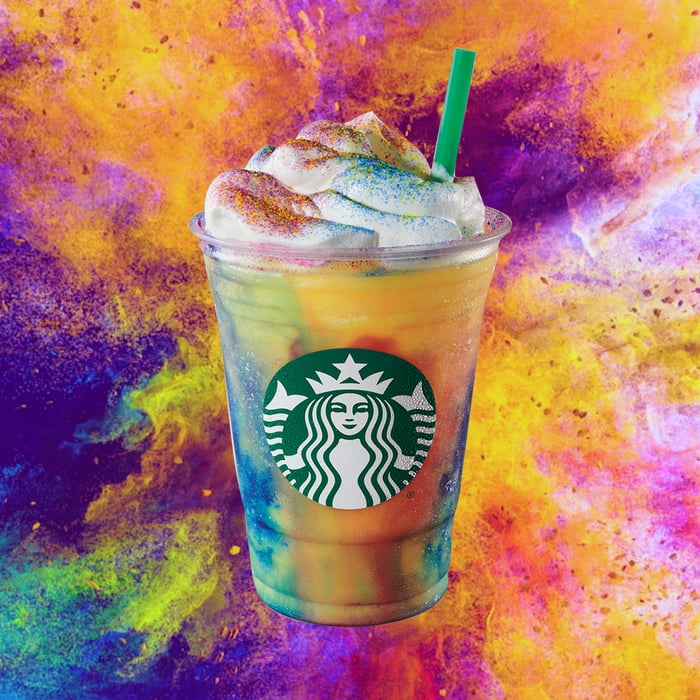 The Tie-Dye Frappuccino contains no coffee. That makes it an acceptable beverage for kids, or anyone else who doesn't want caffeine (assuming they aren't worried about calories or sugar).

The brightly colored drink has a milk base "with dashes of powder in yellow, red and blue (which gets its color from red beet, turmeric, and spirulina) that mix to make a rainbow of vibrant hues," according to a press release. It's topped with whipped cream, and a dusting of colored powder.

"We wanted to create something that celebrates summer and really conveys it both visually and through flavor within the beverage," said Starbucks' Paloma Carrington-Bataller in a press release. "We knew it had to make you smile at first sight and our Tie-Dye Frappuccino does all this! It's summer in a cup and something everyone can relate to; it takes you back to sunny warm days of summer spent at camp or with friends and family."

That's a colorful way to say that the company hopes people share pictures of the drink on social media.

What is Starbucks hoping to accomplish?

The coffee chain naturally hopes to get a bunch of free media attention and create social media buzz. This drink stands out. It's colorful, and customers can't be entirely sure what it'll taste like until they give it a try -- two things which could drive folks to visit a Starbucks to sample it.

And in the heat of July, the idea of a blended cold beverage holds some extra appeal. So it stands to reason it could lure in some lapsed customers and new ones, and give a bit of a boost to spending among the chain's regulars. In the best-case scenario, the Tie-Dye captures attention, and the short-term nature of the promotion causes people to race to stores to try it before it goes away.

Worst case, this latest novelty beverage will deliver a brief wave of media coverage that reminds consumers that Starbucks serves more than just coffee, and that its offerings include affordable indulgences that might help you cool down on a hot day. It's not a subtle strategy, but it's one that has worked to varying degrees in the past.