Levi Strauss' (NYSE:LEVI) first quarterly earnings report as a public company was a little more threadbare than hoped, as the jeans maker posted higher-than-expected sales but lower-than-forecast profits because its biggest, most important business is faltering.

Although President and CEO Chip Bergh told analysts on the conference call the company was working to come up with new ways to reach consumers to offset declining department store sales, he admitted the subset is "a little bit of a melting iceberg."

While Levi Strauss isn't about to strike that berg and sink, the back half of the year is going to be a lot softer than the first half because of it. 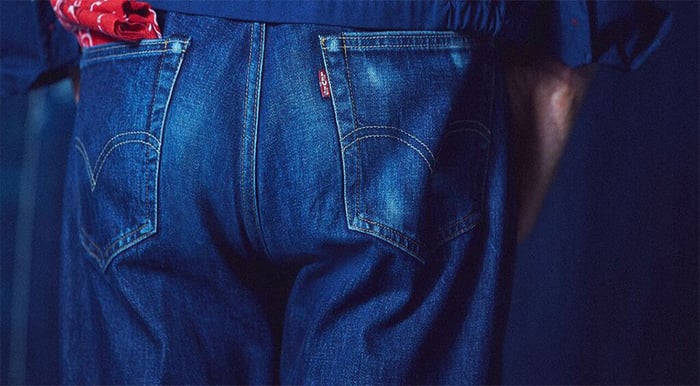 Levi Strauss reported revenue of $1.31 billion, up 5% over last year and ahead of Wall Street's expectations of $1.29 billion, as it expanded into new categories and found new ways to make sales.

For example, the denim specialist has invested heavily in its online business and made strategic pairings, such as appearing in the hit Netflix show Stranger Things and being featured at the Coachella music festival, a spot that it says resulted in sales of its Levi 501 cutoff shorts rising 50% in the quarter.

The efforts are paying off elsewhere, too, as Levi Strauss had near across-the-board growth, with men's sales up 6%, women's rising 16%, and higher sales in both bottoms and tops. It also saw its global direct-to-consumer business shoot up 14% year over year. Yet while the global wholesale business rose 6% in the quarter, the U.S. side of it -- accounting for one-third of total sales -- fell 2%.

The decline is pressuring profits, with earnings coming in at $0.07 per share, a big drop from last year's $0.19 per share, but also missing analysts' forecast of $0.12 per share.

While the costs associated with its recent IPO ate away at some of those earnings, currency exchange rates and higher advertising expenses also caused margins to decline. Gross margin ended up falling 60 basis points from last year and operating margin was down 40 basis points.

Department stores are the weak link

Yet for all the growth Levi Strauss saw, it's hard to escape the downdraft it is facing, as a third of its business declined.

The company's wholesale business is primarily tied to sales to U.S. department stores like Kohl's, J.C. Penney, Macy's, and Sears. The bankruptcy of Sears last year hurt, though no one retailer represents more than 10% of revenue, but because the shopping mall is declining and department stores continue to reduce their footprints, Levi Strauss' ability to sell more goods at more doors becomes limited.

Nor is it going to improve. Bergh told analysts, "We are continuing to expect the wholesale business in the U.S. to be challenged in the second half of the year as we face bankruptcies and door closures and tightening of customers' open-to-buy budgets."

To offset the weakness, the company is attempting novel initiatives, such as a new concession model in six Macy's stores that the CEO said looked "very, very promising." The jeans maker has an eye on expanding it to more stores. The company is also testing its Levi's brand in Target, another program Bergh is hopeful about after receiving early feedback.

Online initiatives are also growing, and though for competitive reasons he wouldn't discuss how Levi Strauss is going to approach the two-day Prime Day sales event next week, Bergh did say the company is very happy about its relationship with Amazon.com, identifying it as one of the company's fastest-growing customers.

Levi Strauss didn't adjust its annual guidance for fiscal 2019, and it expects net revenue growth to be in the mid-single digits, but fourth-quarter sales are going to suffer because it won't be able to include Black Friday sales in its earnings due to the fiscal year ending five days before the big sales event.

Some analysts believe denim apparel has a bright future as consumer tastes pivot away from athleisure wear, and Levi Strauss' second-quarter earnings report would suggest that trend is happening since sales are on the upswing. With management holding firm on guidance, it's possible the third and fourth quarters will be strong on their own because they're not getting juiced by the start of the Christmas holiday.

Still, the impact of Levi Strauss' department store business needs to be confronted, or its results will look more faded than a pair of its denim jeans.