There's only one stateside exchange-listed megacap -- a stock commanding a market cap north of $300 billion -- that has risen by better than 50% this year. Facebook (NASDAQ:FB) has soared 53.5% so far in 2019.

To be fair, there are just 14 stocks including Facebook that are currently at megacap status. It's a thin pool. However, Facebook is also the only one of 88 U.S.-listed stocks with market caps higher than $100 million with at least a 50% pop in 2019. In fact, you have to go 155 stocks down the market cap ladder before you get to a rung that has also risen by at least 50% year to date. 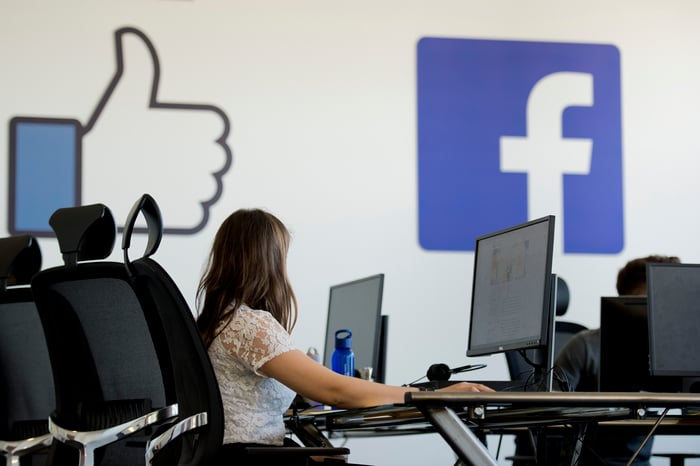 Facebook as the best-performing megacap of 2019 is an unlikely sight. The world's leading social networking site entered the year dogged for data privacy concerns and slowing usage growth. Facebook shed more than a quarter of its value in 2018, improving its starting line for this year's meteoric recovery -- but a 53.5% surge is impressive despite the sandbags that the dot-com giant took on last year.

Facebook singlehandedly took the shine off of FANG stocks last year, but now it's leading the four-headed tech monster's revival. Though sentiment has obviously turned in favor of Facebook, it's not as if the online bellwether is suddenly stepping on the gas again. Revenue growth has actually continued to decelerate this year, as top-line gains have slowed from 33% to 30% to 26% in its two most recent quarters.

A key to Facebook's resurgence with growth investors is that it's not just about the namesake site and the Messenger chat application that it's been trying to push as a stand-alone platform. Facebook's gaining traction with Instagram and WhatsApp, two popular social apps that don't carry the same negative stigma as their parent company's namesake site.

Facebook is also getting better about its monetization. Revenue rose 26% and it served up 32% more ads than it did a year earlier despite only growing its daily active user base by 8%. Stickiness is a factor given the improving engagement across Facebook's different apps, but it's also finding more ways to squeeze marketing missives into its feeds.

Time has been Facebook's biggest ally in 2019. The more we move away from the time when bashing Facebook was popular -- the fewer people who recall Cambridge Analytics or some of the unflattering comments made by Facebook's CEO and COO -- the better the outlook will be for the world's largest hub of friends, families, and shared-interest groups.

The stock trades at 21 times next year's projected earnings, a reasonable multiple for a stock that has taken off this year. It has several irons in the fire if any of its platforms should prove mortal again. With 2.38 billion monthly active users and 1.56 billion of them checking in daily, the company's sell-off last year was overdone. The recovery is nearly complete as it closes in on last summer's all-time highs, but now expectations are heightened. Facebook is on top again among megacaps, but staying there is never easy.