Last week was full of drama in marijuana stocks, as that's when well-respected Canopy Growth (NASDAQ:CGC) co-CEO Bruce Linton was apparently terminated from his job. "Where will Linton go next?" was still a hot subject of conversation this week, as was Canopy Growth's future without him.

He and Canopy Growth were far from the only topics of discussion in pot business circles this past week. There was a legal matter with one of the top Canadian growers, a huge sales increase with a packaging and accessories maker, and an historic hearing on pot legalization in Congress. 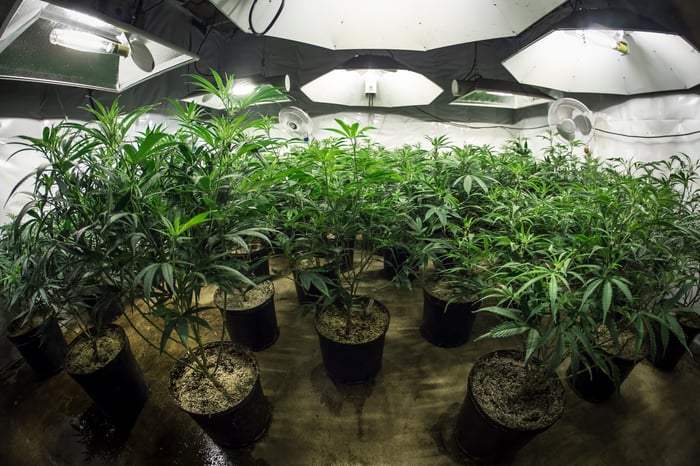 The week in marijuana stocks didn't get off to an encouraging start. On Monday before the opening bell, Canadian grower CannTrust Holdings (OTC:CNTTQ) admitted that it received a noncompliance report from regulator Health Canada.

It seems the company was growing around 5,200 kilos of product in five rooms in its Niagara greenhouse that were unlicensed at the time (October 2018 to March 2019). All told, the facility has 12 grow rooms. CannTrust subsequently placed a voluntary hold on around 7,500 kilos of other inventory grown in those rooms.

The company's management didn't quite absorb all the blame for the ruling. In a press release, it said that the noncompliance report was "based on observations by the regulator regarding the growing of cannabis in five unlicensed rooms and inaccurate information provided to the regulator by CannTrust employees." So much for standing up and taking a bullet and for keeping up employee morale through a controversy.

Although marijuana is now legal across the board in Canada, lawmakers take its regulation very seriously. There's little-to-no excuse for not being in full compliance at all times, particularly considering that a company could, in the worst-case scenario, lose its cannabis license if it doesn't do so.

CannTrust is losing the trust of its investors, and that will be tough to recover. The nearly 50% slide in its share price this week might stick or even worsen, depending on how the situation develops.

Momentum could be building for some form of legalization in the place where it counts most -- the U.S. Congress. This week, for the first time, the House Judiciary Subcommittee on Crime, Terrorism and Homeland Security held hearings on relaxing Federal marijuana laws.

Although this is an important first step on the road to potential decriminalization if not full legalization, it faces several hurdles.

The first is consensus, as congressional opinions differ on the goals of and the best paths toward a loosening of federal law. A second is the stance of top political figures. Majority leader Mitch McConnell appears resistant to marijuana legalization, while President Donald Trump has indicated tepid support, at best.

Regardless, as with broader recent developments in cannabis, such a hearing would have been inconceivable only a few years ago. The fact that this is being taken seriously, debated, and even legislated in the form of these bills is an encouraging sign for the marijuana industry that the legal ice will soon melt... at least to some extent.

The marijuana supplies and packaging specialist unveiled its Q3 of fiscal 2019 results on Tuesday. These revealed that, largely on the back of organic demand growth, sales for the quarter tripled and then some, to $41.5 million from the $12.9 million of Q3 2018. Gross profit doubled over that stretch of time, to land at $7.4 million.

Unfortunately, both operating and net losses deepened. That said, Q3 2019's bottom-line shortfall wasn't much deeper, at $10.6 million against $9.2 million in the year-ago quarter.

All in all, the results were encouraging. Net losses are expected in the nascent marijuana industry, and KushCo's aren't scary enough to discourage investors. Plus, the company occupies a useful niche in the business, and its attempts at reigning in costs are bearing fruit. It's also smartly capitalizing on the popularity of modern means of consumption, such as vaporizers (vapes).

Finally, its ambition to list on the Nasdaq will confer legitimacy on KushCo stock and should attract interest from funds and individual investors in more traditional industries.