Please ensure Javascript is enabled for purposes of website accessibility
Free Article Join Over 1 Million Premium Members And Get More In-Depth Stock Guidance and Research
By Chris Neiger - Jul 12, 2019 at 12:00AM

The e-commerce giant is preparing for the increase in U.S. jobs -- internal and external -- requiring highly skilled workers.

The company explained in a press release that it will offer retraining programs to its employees from all backgrounds so that they can fill highly skilled technical and nontechnical roles in its tech hubs, corporate office, fulfillment centers, retail stores, and the like. It added that the retraining may help employees "pursue career paths outside of Amazon" as well.

For us, creating these opportunities is just the beginning. While many of our employees want to build their careers here, for others, it might be a stepping stone to different aspirations. We think it's important to invest in our employees and to help them gain new skills and create more professional options for themselves.

Why make such a sizeable investment? The financial commitment to "upskill" its workforce is significant, but the company sees a huge demand for skilled workers internally in the coming years, and it wants to ensure that it has a large enough pool of workers to tap into. 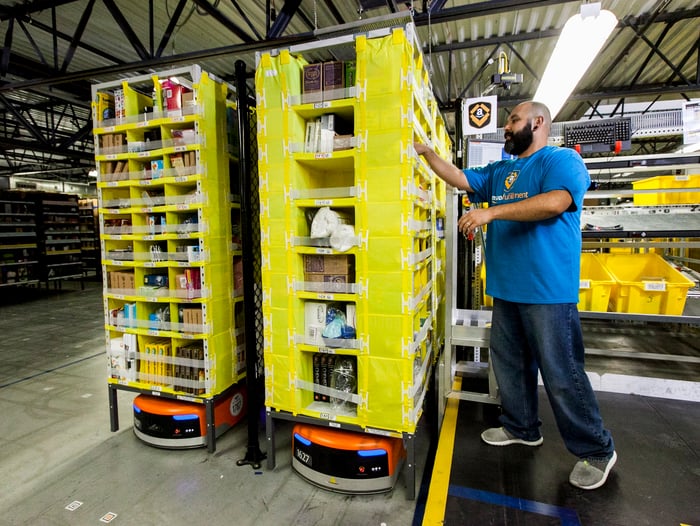 A need to improve employees' skills

Many of those jobs don't seem to directly pertain to Amazon, but the fact remains that highly skilled jobs are increasing in the U.S., and Amazon wants to ensure that it has enough potential employees to meet its needs as it expands its reach into new sectors. Its new training programs and the expansion of existing ones is a way to keep itself competitive as workers look for ways to improve their skills and increase their marketability.

Within Amazon, some of its fastest-growing highly skilled jobs were data mapping specialist (832% growth), data scientist (505%), solutions architect (454%), security engineer (229%) and business analyst (160%). Within customer fulfillment, highly skilled roles have increased over 400%, including jobs like logistics coordinator and process improvement manager. If it can't find trained applicants from outside the company, perhaps it can encourage getting the training from within.

It's also worth pointing out here that Amazon has faced some backlash from politicians for the physically strenuous conditions in its fulfillment warehouses. Additionally, some Amazon factory employees in Minnesota threatened to strike during the company's Prime Day to demand better working conditions. All of which means that this latest announcement by Amazon is an effort to show politicians and employees that the company is working to improve opportunities for its workers.

While spending $700 million over the next five years is no small investment, Amazon likely sees this as money well spent on attracting and retaining talent. It knows that skilled workers have a wider choice of employers, and if it can invest in its own workers right now, it may have an easier time convincing them to stay later on.

A McKinsey report published last year said that the need for workers with technological skills will increase over the next decade, while "the demand for others, including physical and manual skills, will fall." If Amazon doesn't do its part to advance its workers' skills, then the company might find it difficult to fill job openings in the coming years.