Shares of Anheuser-Busch InBev (NYSE:BUD) had a rough 2018 as the global beer giant slashed its dividend in half and saw its stock fall to a six-year low amid the rise of craft beer and changing consumer tastes.

But 2019 has been a different story. The stock has risen 34% through the first half of the year, according to data from S&P Global Market Intelligence, with the help of a bullish outlook for 2019, some analyst upgrades, and a plan to spin off its Asian unit in an IPO. 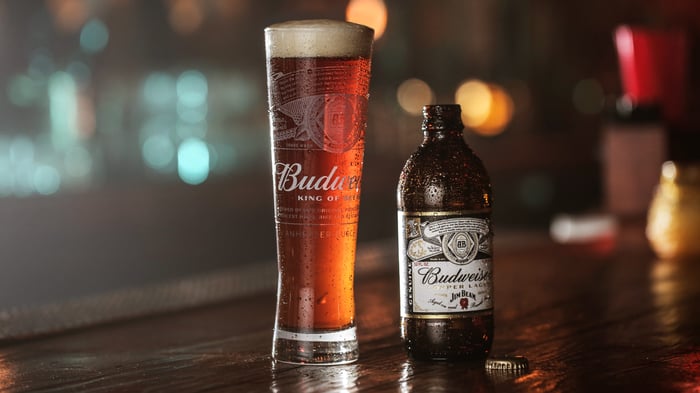 As you can see from the chart below, the stock has tacked on gains gradually over the year. 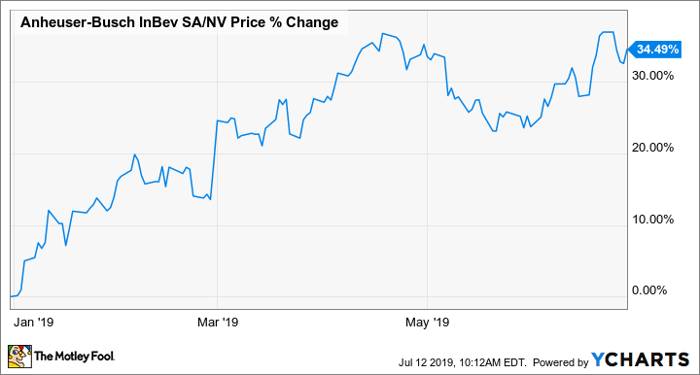 The stock hit the ground running in 2019 as shares jumped 4.2% on Jan. 11 when news broke that the company was considering taking its Asian unit public, a move that could bring in more than $5 billion in cash to help it pay down the debt it took on when it acquired SAB Miller.

The company also refinanced $15.5 billion in debt, and later in the month got an upgrade from RBC Capital Markets analyst James Edwardes Jones, who called it a top pick, upgrading it from outperform.

The stock gained another 9.7% in the two sessions following its fourth-quarter earnings report, its biggest surge of the year, as revenue rose 5.3% in the quarter and adjusted earnings per share edged up from $1.24 to $1.26.

The market also seemed to like the company's outlook. Though AB InBev didn't give specific guidance, it called for strong revenue and EBITDA growth, and said it was focused on growing both volume sales and revenue per hectoliter (100 liters) this year thanks to its "premiumization" initiatives.

In early April, the stock moved higher on an upgrade from Bank of America Merrill Lynch analyst Fernando Ferreira, who raised his rating from sell to neutral in response to the company's debt reduction plan and its earnings momentum.

In May, the company delivered another solid earnings report with revenue up 5.9% and an 8.2% increase in EBITDA, though a stronger dollar pushed down adjusted EPS from $0.85 to $0.79. The stock slipped after the report, but just days later the company announced it would file for the IPO for its Asian unit, and shares moved higher in June as it began meeting with investors to gauge interest.

The IPO should be the biggest factor shaping the second half of the year for AB InBev, as the offering could value the subsidiary at as much as $64 billion, making it the biggest IPO in the region this year. A successful IPO coupled with the company's improving performance could push the stock even higher this year, though investors should be mindful of the same pressures that sunk the stock in past years.