First Data Corporation (NYSE: FDC) surged 60.1% in the first half of 2019, according to S&P Global Market Intelligence, as the company agreed to be acquired by payment processing giant Fiserv (NASDAQ:FISV) on Jan. 16 in an all-stock deal, which hasn't closed just yet.

First Data kept the good times rolling in April, as its first-quarter earnings release substantially beat revenue expectations. Though the company only reported a 1% increase in revenue, its constant-currency revenue was a much stronger 8%. The company reiterated its full-year guidance of 5% to 6% organic revenue growth and 6% to 8% adjusted EBITDA growth. 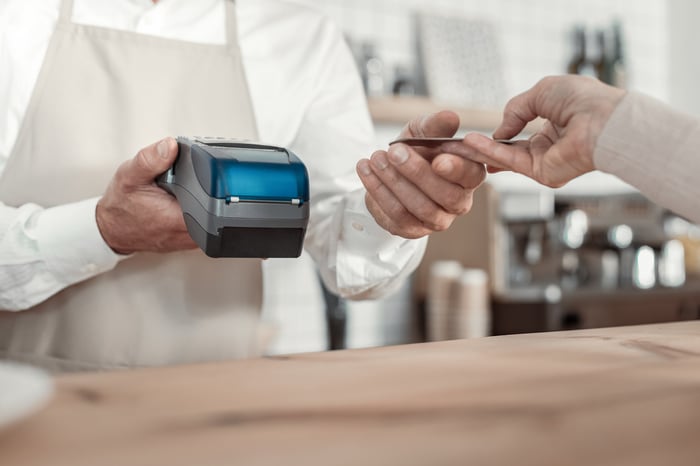 At the time of the acquisition announcement, Fiserv was paying the equivalent of $22 billion for First Data, roughly a 29% premium. First Data's shareholders will receive .303 shares of Fiserv for every share of First Data owned, meaning that investors will now be invested in the combined efforts of both companies. After closing, Fiserv will own 57.5% of the combined company, with First Data shareholders getting 42.5%.

Each company has large market share in its complementary side of the payments processing industry. Fiserv generally serves banks and financial institutions with digital and electronic processing capabilities, while First Data is focused on the merchant side, acquiring merchant customers and providing them with digital tools such as Clover, First Data's digital point-of-sale terminal.

There are a few overlapping businesses between the two companies, such as First Data's Star debit card service and Fiserv's Accel, which could provide fodder for cost synergies. The combined service could pose a more formidable challenge to the massive processing networks Visa (NYSE:V) and Mastercard (NYSE:MA).

Overall, management expects to save $900 in cost synergies but will reinvest $500 million of that over five years across merchant solutions, risk management, and new payment technologies. Fiserv also intends to refinance First Data's $17 billion in debt at a lower rate.

Wall Street responded positively to the tie-up, though investors should remember that the merger was likely in part a defensive move. In May, it was reported that First Data might lose Bank of America (NYSE:BAC) as a merchant services customer, as BofA may decide to roll out its own in-house offering. Additionally, both companies are facing disruptive start-ups on their respective sides of payment transactions. Nevertheless, both Fiserv and First Data are leaders in their respective fields, and they will now be able to better compete going forward. Still, nothing will come easily to the combined company in the future.