As the fintech industry matures, more and more companies in this arena are looking to either encroach on traditional banks' territory or figure out ways they can service banks to help usher them into the digital age. For instance, just last month, Square Inc (NYSE:SQ) applied for a bank charter in Utah that would allow the company to lend money to its small- and medium-sized business partners. This month, more news comes from a payment processing company looking for growth opportunities in the banking world.

The purpose of the joint venture, per Apiture President Chris Cox, is to "provide community and regional banks with technology that matches that of the world's largest financial institutions." According to the press release, Apiture will make it easy for smaller banks and credit unions to provide their customers with customized websites and mobile apps, allowing consumers to efficiently and intuitively manage bill payments, mobile check deposits, and fund transfers. First Data and Live Oak will both own an equal 50% share of the new company. 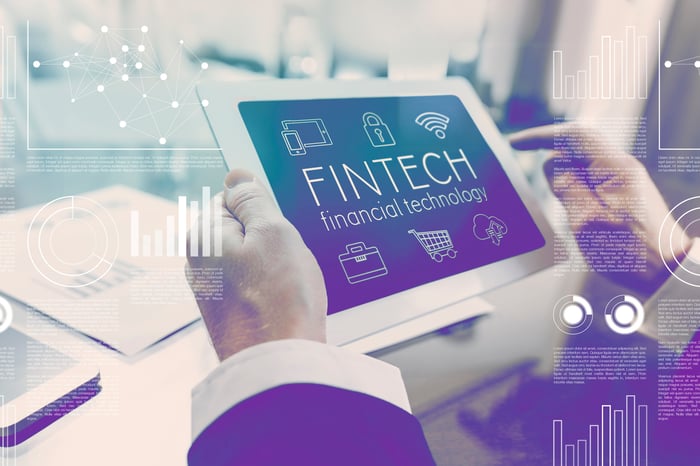 First Data teamed up with a small bank that knows a thing or two about starting fintech ventures. Image source: Getty Images.

What this means for First Data

Since being spun off from private equity investment group KKR, First Data has been saddled with heavy debt and struggled to grow revenue, but this might be starting to change. This summer, in a $750 million deal, First Data acquired CardConnect Corp whose platforms give retailers the ability to manage transactions in real-time, accept mobile payments, customize reports, and encrypt and tokenize payments.

With this new joint venture, First Data appears to be exploring ideas for growth wherever they can be found; a good sign for investors. The company's CEO Frank Bisignano has admitted to having his finger on the pulse of the banking industry for quite a while. At Bernstein's 33rd Annual Strategic Decisions Conference this past May, Bisignano stated:

I know it's subtle, but if you read between the lines in the above statement I think you'll discover that Bisignano not only likes banks but believes servicing banks will soon be a huge part of First Data's business. Since this appears to be where fintech is headed in general, Bisignano and his company deserve credit for reading the industry tea leaves and riding macro tailwinds to future growth opportunities.

What this means for Live Oak

Despite being a young company, Live Oak has a fairly successful history of delving into the fintech world. In 2012, the company created nCino, a bank operating system that allows banks to securely and quickly communicate with its own customers. nCino has since been spun off and now counts big banks like Sun Trust Banks and Four Oaks Fincorp as customers. Earlier this year Live Oak established Live Oak Ventures, a venture capitalist division with $10 million available to invest in fintech solutions for banks.

Live Oak Bancshares only went public a little more than two years ago in July 2015. In the past year, the company's share price has risen by 65%, trouncing the S&P 500's returns in the process. The bank's stock price has merely followed the company's fundamentals. In the second-quarter, Live Oak's non-GAAP EPS increased 155% to $0.28 and the number of loans and leases it originated increased 64% to $584 million. The company's willingness to innovate with fintech has certainly paid off!

Based on purely personal experience, my local credit union offers an extremely clunky online experience and an even more limited mobile app. If my experience is anything close to the norm for local banks and credit unions, there would seem to be a number of potential Apiture customers in the banking world.

For First Data, Apiture represents another rung on the ladder the company is using to find ways to accelerate what has been fairly stagnant revenue growth. In its most recently reported quarter, the company reported $1.8 billion in total segment revenue which was only good for 3% year over year growth. Together with its recent acquisition of CardConnect, First Data is finally showing it knows it has to do better if it wants to compete with the likes of Square and other disruptive upstarts in its space.

Live Oak has shown an incredible willingness to branch out into the world of fintech. This probably stems from CEO Chip Mahan's belief that "banking is broken in its current form" and he vows to "continue to invest in the technologies and companies that solve the problem". While there are several moving parts that go into a banking operation, investors might want to note Mahan's successful track record of investing in fintech and his eagerness to continue to do so in the future.