When the Pentagon named Lockheed Martin and not Boeing the winner of the Joint Strike Fighter program in 2001, it ensured that Lockheed, not Boeing, would build the plane that would become known as the F-35, and handed Lockheed the most valuable weapons program in the world.

And that's OK. Turns out Boeing may be onto an idea that's even bigger than the F-35. 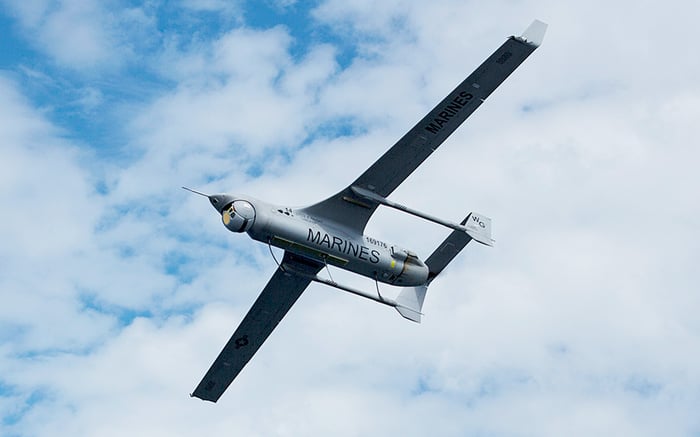 Former Chairman of the U.S. Joint Chiefs of Staff Admiral Mike Mullen once called the F-35 "the last manned fighter" jet that the U.S. would ever build. The future of aerial warfare, meanwhile, is looking more and more likely to be a future dominated by drones -- and as we're increasingly seeing, this is a future that Boeing aims to dominate.

Consider the evidence. In 2018 Boeing beat out several rivals (Lockheed among them) to win an $805 million development contract to design a fleet of MQ-25A Stingray carrier-based drones for the U.S. Navy. A few months later we learned that Boeing was among three finalists in a U.S. Army project to find a replacement for the venerable RQ-7 Shadow drone (currently built by Textron). One month later Boeing unveiled a project to develop jet-powered "wingman" drones to fly alongside Air Force fighter jets on combat missions.

And just one week ago we learned that Boeing has won a $390 million Pentagon contract to supply 173 small unmanned aerial vehicles to the U.S. and foreign militaries.

What's in the box

The Pentagon announced Boeing's latest contract in its digest of defense contracts awarded on June 28. Technically awarded to Boeing drone subsidiary Insitu, the contract describes the sale of "up to 63 RQ-21A attrition air vehicles" (i.e. drones) to the U.S. Navy and U.S. Marine Corps, of 17 more RQ-21As to "foreign military sales ... customers ... including the governments of Canada, Poland and Oman," along with the sale of "up to 93 ScanEagle UASs in various configurations."

At an average cost of roughly $2.25 million per drone, each of these sales can be expected to generate something on the order of $155,000 of profit for Boeing at the 6.9% operating profit margin common within the company's defense division (according to data from S&P Global Market Intelligence).

These are not new customers for Boeing. The company's ScanEagles have been in service with the Marines since 2004, and with the Navy since 2005. The newer Blackjack has achieved "program of record" status with the Navy and Marines under their "Small Tactical Unmanned Aircraft System" program. Even so, this is a large increase in the deployment of these systems -- one of the largest "small" UAV contracts I've seen come out of the DoD in some while.

For context, Boeing's smaller rival AeroVironment (NASDAQ:AVAV) is generally considered the most popular manufacturer of small UAVs for the military -- but its contract wins tend to be on the order of just $10 million or $20 million in size.

What this means for AeroVironment

That being said, to allay concerns among AeroVironment investors, I wouldn't necessarily count Boeing's gain here as AeroVironment's loss.

With a 10-foot wingspan and weighing 40 points at takeoff (launched from a small catapult), the ScanEagle is classed as a "Group 2" (medium size) UAV under the Defense Department's drone classification system. The Blackjack is even larger. Its 16-foot wingspan and maximum takeoff weight of 135 pounds place it squarely within "Group 3" (large drones).

Both of the Boeing drones therefore dwarf AeroVironment's ubiquitous "Group 1" hand-launched Raven drone, which weighs in at just four pounds, three ounces with a three-foot wingspan. They're simply not in the same class, and don't compete with each other.

Long story short, there's more than enough room for both companies to succeed in this market. And with Boeing's share of the fighter jet market now sharply limited by Lockheed's success with the F-35, it really needs to succeed in drones if it's to have much of a future as a defense company.