Anyone who's driven the northern terminus of the New Jersey Turnpike anytime over the past 15 years has been visually assaulted by the sight of the massive entertainment-focused shopping mall under construction. Previously called Xanadu, but now American Dream, former Gov. Chris Christie was not wrong when he dubbed the orange-tinged, multicolor eyesore (to paraphrase), the ugliest building in New Jersey and possibly America.

Yet it has undergone a major transformation in the past year, and the theme-park-based shopping oasis is finally nearing completion, with a scheduled opening sometime in October. Importantly, the unattractive exterior palette has now become a more visually appealing white and retailers are beginning to move into the mall and hire employees.

Given the shopping mall is in decline throughout the country, with customer traffic falling and anchor stores closing their doors, it could be argued this is exactly the wrong time to be erecting a new monolith to consumerism. However, a case can also be made that this type of mall is what can save retail. 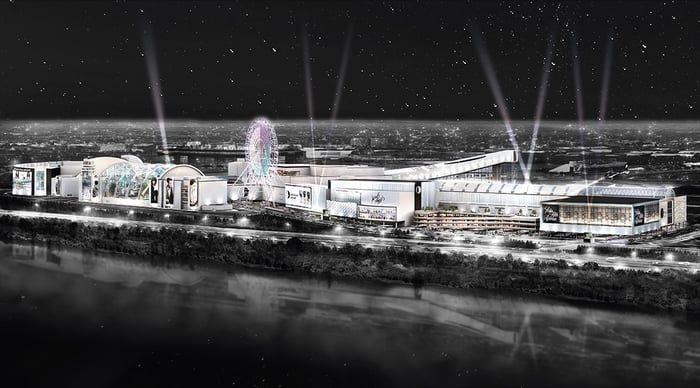 An unlikely role model for the mall's future

American Dream should never have been built. It is constructed on top of ecologically sensitive wetlands amid a sports complex that's fed by highways subject to some of the worst traffic jams in the country. But its construction was allowed because the convention center there was going to be replaced by a new one in nearby Newark, and a mega shopping mall, featuring an 8.5-acre theme park, indoor ski slope, ice skating rink, and water park, would help offset the loss of revenue that would ensue.

Now when American Dream opens, it will be the third-largest shopping complex in North America, behind West Edmonton Mall in Alberta, Canada, and the Mall of America in Minnesota. Not coincidentally, all three are owned by the same privately held company, Triple Five Group.

Begun just prior to the market collapse of the last decade and struck by the financial failure of a number of its backers, American Dream has been propped up by state bonds that kept it afloat through its financial turmoil.

That likely explains why the project survives after so long, particularly as data from Coresight Research shows retailers in the U.S. have already announced over 7,000 store closures so far this year -- exceeding the total closed for all of 2018, and suggesting the number of closures could reach 12,000 by the end of 2019.

Worse, other data shows retail store traffic is still falling, down nearly 9% in May and marking a continuation of a monthly trend that extends back years. Maybe in the early 2000s, when American Dream was started, a megamall made sense, but not today. Or does it?

"Experiential retail" has become something of an easily thrown-around catchphrase, though one used to indicate how retail can thrive. The National Retail Federation found nearly half of consumers attended at least one "retailtainment" event in 2018, but it jumped to two-thirds for millennial shoppers. An entertainment complex like American Dream would seem to be the epitome of such a strategy on a grand scale.

We're seeing a return to growth of restaurants that incorporate food and fun. For example, the soon-to-IPO Chuck E. Cheese has posted five consecutive quarters of same-store growth. The similarly situated Dave & Busters, which is still seeing lower comps, nevertheless is moving in the right direction and expects sales to grow at double-digit rates.

Although store vacancies are a challenge for any mall, American Dream has a long roster of businesses looking to move in, including Ulta Salon, Columbia Sportswear, and Sephora, indicating plenty of retailers are still looking for physical locations where they can operate.

The store of the future

Whether the American Dream complex is the right venue for such experiences remains to be seen. It is situated in a densely populated metropolitan area with excruciating traffic problems that are exacerbated when the existing sports complex hosts an event. Now a massive shopping mall that could attract tens of thousands of people to the same spot at the same time conjures up congestion problems that are the stuff of nightmares.

Individual retailers may need to adopt an experiential mindset within an entertainment-focused venue. Malls may have to focus more on creating unique and compelling reasons to get people off the couch and off their computers, otherwise they'll just shop on Amazon.com.

It might not need to be on the massive scale of American Dream or the Mall of America, but it might require more than just offering a yoga class at lululemon athletica or a cooking class at Whole Foods Market. Making the shopping experience an event that's relatable and perhaps even Instagrammable could be what staves off the demise of the shopping mall.