Companies preparing for their public debut want to impress the market so they can hit the ground running, and CEC Entertainment, the owner of the Chuck E. Cheese and Peter Piper pizza chains, is doing just that. The entertainment-based restaurant operator, which is hoping to go public in a month or so, highlighted preliminary second-quarter earnings recently with a report showing its fifth consecutive period of same-store sales growth.

This isn't CEC's first time in the public markets. It was taken private in 2014 when private equity firm Apollo Global Management (NYSE:APO) bought it for $948 million amid a general slump in the dining sector and stiff competition for children's entertainment. But Apollo performed a makeover of the two restaurants, and the results finally appear to be paying off. 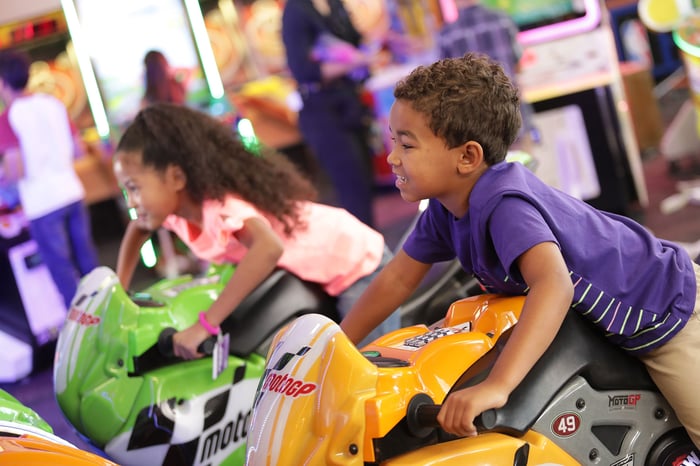 Chuck E. Cheese is the primary restaurant chain in the company with 609 locations, while pizza shop Peter Piper operates 141 stores. The restaurants are in 47 states and 14 countries. Although CEC didn't break out the performance of the individual chains, it said overall comps for stores open 18 months or more were up 0.4%, which included a hit of 1.8 percentage points due to the shift in the Easter holiday and timing of school spring breaks. Without those impacts, its comps would have been up 2.2% over last year.

In an updated presentation for the combined businesses that will see CEC return to the public markets, it sought to delineate its advantages over Dave & Buster's (NASDAQ:PLAY), another entertainment-based food operator, albeit one targeting adults.

Where CEC is seeing strong comps growth, Dave & Buster's is suffering from declines, and although the adult chain could see nearly double the growth in sales through 2020, CEC's presentation suggests a drop of more than a percentage point and a half in pretax adjusted operating margin for the company. That compares to a 1.5 percentage point increase in margin for CEC.

CEC also is forecasting compound growth rates for earnings before interest, taxes, depreciation, and amortization (EBITDA) in excess of 8%, while it sees Dave & Buster's coming in with less than 5% growth.

Teens and tweens are moneymakers

CEC makes the argument that its business is more nimble because its venues are smaller and therefore less expensive to build and operate, and existing locations can be remodeled to a proven, more profitable style. Dave & Buster's, on the other hand, is only counting on building out more restaurants in urban markets, which is a more expensive proposition.

It's reasonable to compare the two chains because they are fairly analogous to each other, with the same entertainment-based concept. And CEC Entertainment has a big opportunity to cash in on its teen and tween target demographic, much as Five Below (NASDAQ: FIVE) is killing it with the same group. Parents are giving their kids more leeway to spend money, and by keeping it affordable, they're able to generate a lot of repeat business.

CEC has also done away with its tokens in favor of chip-enabled Play Pass cards that allow kids to earn more time or points on games. And in some of its remodeled stores, it is doing away with the points altogether, as more time is proving to be the more popular option.

Taking the back door to the market

To return to the public markets, CEC will use a reverse merger with publicly traded Leo Holdings (NYSE:LHC). CEC will change its name to Chuck E. Cheese Brands and trade on the New York Stock Exchange under the ticker CEC. It anticipates shareholders voting on the proposal at the end of the month and going public immediately thereafter.

It said that once the deal is completed, other investors will purchase $114 million of Leo's stock in a private investment in public equity (PIPE) transaction. It notes that is $14 million more than originally anticipated with "a highly respected investor with a strong track record in the consumer sector" taking the lion's share, which CEC says shows strong confidence in the deal. The extra funds also reduce the minimum cash Leo needs to finance the transaction from 75% to 68%.

CEC Entertainment looks like a unique restaurant investment that is showing strength at a time when many other chains are exhibiting weakness. The lower rate of comps growth could point to a slowing of its momentum, but with the summer months here, there may be more opportunities for parents looking for fun outlets for their kids to play in a safe, protected environment.