The chain is hoping its focus on food and games will give it a competitive edge.

Five years after Chuck E. Cheese's private equity owners took the food and entertainment chain private, the restaurant famous for its kid-oriented animatronic entertainment and gaming atmosphere will be returning to the public markets.

Through a reverse merger with publicly-traded special purpose acquisition company Leo Holdings, the restaurant chain's parent CEC Entertainment will trade once again on the New York Stock Exchange under the ticker "CEC" and change its name to Chuck E. Cheese Brands. 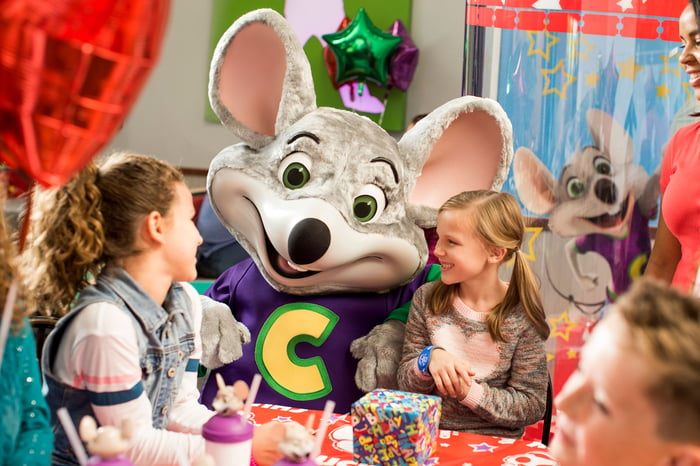 A side of entertainment with the meal

Apollo Global Management (APO) bought the restaurant for around $948 million in 2014, at the time the fifth largest leveraged restaurant buyout ever, as the chain struggled to compete against the popularity of kid-centric movies and a general decline in restaurants. Apollo will continue to be the majority shareholder after CEC goes public with a 51% stake.

Known for its arcade atmosphere and games of chance, plus its ubiquitous coins, rides, and play areas, as well as its animatronic musical characters, Chuck E. Cheese has always been a unique dining concept. Parents didn't go there expecting gourmet meals -- and its pizza and sandwiches didn't disappoint in that regard -- but the fun nature of the stores still made them a perfect destination for kids parties.

And the business has improved. After stumbling through 2017 with steadily declining same-store sales, Chuck E. Cheese turned it around last year and reported rising comps throughout the year. It extended that streak into 2019 with comps surging 7.7% in the first quarter, partly the result of updating its restaurants and upgrading its payment system to have tokens give way to RFID chip-enabled Play Pass cards that allow for either timed play or points. Now, kids can play for as long as they want using the cards.

Included in CEC's results is Peter Piper Pizza, which was also acquired in 2014, but it targets 10 to 16-year olds whereas Chuck E. Cheese tends to top out at 12 years old. It also has a gaming side to the business and is a spot for parties, but Peter Piper changed to focus more on the food by upgrading its menu and adding items like pasta and chicken wings. The number of games was also reduced by 25%, and the overall restaurant size was cut at least in half.

People looking to have fun

It's this focus on games and entertainment at Chuck E. Cheese and Peter Piper that could give the company the competitive edge it needs in the fiercely competitive restaurant industry.

Dave & Busters, for example, similarly revamped its stores after seeing a collapse in comps in 2017, and was rewarded with a 13% rise in revenues last year. While full-year comps were down 1.6% in 2018, the adult-oriented food and entertainment chain saw fourth quarter same-store sales rise 2.9%, suggesting it, too, has made a turnaround.

Yet Chuck E. Cheese is arguably the better positioned concept, because the tween and teen demographic represents a big opportunity. Discount retailer Five Below has been exclusively mining the market by giving kids the ability to explore and shop almost without limit by selling low-priced merchandise.

The combination of creating an experience and the gaming angle, along with the ability to cash in on the time spent playing by buying prizes provides Chuck E. Cheese with an enhanced way to benefit from the same desire for instant gratification.

Getting a mulligan on fun

The restaurant industry is fickle, and Chuck E. Cheese has been a publicly-traded company before. Investors have seen the ups and downs of this business, and there always seems to be new competition around the corner. Last time, it was movies, now it's bounce houses and trampoline parks.

Yet the strong financial performance in recent quarters could mean the arcade-like restaurant has timed its reentry at the right time and just might find investors willing to play ball again.