A high valuation and worsening industry trends may have played into the decision.

Kids' entertainment pizza chain Chuck E. Cheese won't be returning to the public markets after all. The chain's private equity owner Apollo Global Management (APO) and Leo Holdings (LHC) canceled what was supposed to be a $1.4 billion reverse merger at the last minute.

Although no explanation was given by either side, some analysts speculated the proposed value of the deal may have been too high. The Dallas Morning News quoted Pacific Management Consulting Group analyst John Gordon as saying, "If we go with the simplest explanation first, it's that the offering price that was being asked was too high for the investor demand." 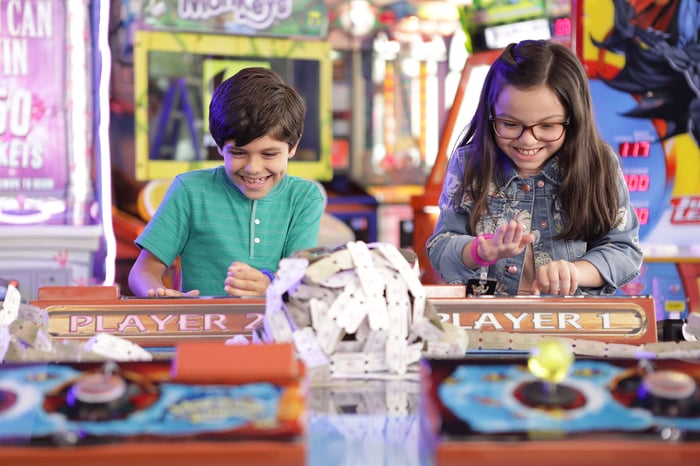 Leo Holdings, the company operated for the purpose of facilitating acquisitions, canceled the extraordinary general meeting for its shareholders to vote on the matter that was scheduled for the next day.

As recently as last month, there were no hints of trouble with the reverse merger. Queso Holdings, Chuck E. Cheese's actual parent, had touted preliminary second-quarter results showing the chain growing comparable-store sales 0.4%, its fifth consecutive quarter of higher comps. It also said that once the deal was complete, other investors were ready to purchase $114 million of Leo's stock in a private investment in public equity (PIPE) transaction, which it maintained showed strong confidence in the deal. Apparently not so much.

Chuck E. Cheese has spent the past five years turning its business around. It was known as much for its ubiquitous play tokens for its arcade and games of chance as it was for the animatronic musical character it takes its name from.

But the business struggled to compete against kid-oriented movies, the rise of digital gaming and entertainment, and a general decline in restaurants. That led Apollo to take the restaurant chain private in 2014 in a $948 million leveraged buyout (LBO). At the time, it was the largest restaurant LBO ever.

When Chuck E. Cheese returned to the public markets, the private equity firm was going to still own 51% of Leo Holdings, which would have changed its name to Chuck E. Cheese Brands, with its stock trading on the New York Stock Exchange under the CEC symbol.

New changes made a difference

Apollo has been trying to unload Chuck E. Cheese for two years after it was originally rumored to be considering an IPO in 2017 but subsequently put the company up for sale. When the chain's comps began to wither, the offering was pulled and Apollo launched an overhaul of the business.

The restaurants were upgraded, and a new payment system did away with tokens in favor of chip-enabled Play Pass cards that allow for either timed play or points.

The changes seemed to work as comps improved all through 2018 and the restaurant posted 7.7% growth in the first quarter. While the Q2 numbers were significantly below that threshold, management expressed satisfaction with the gain nonetheless. The company also owns the Peter Piper pizza chain, which was also overhauled and shrunk to emphasize food more than entertainment.

It could be that the deceleration in comps growth worried investors. Although adult food and entertainment chain Dave & Buster's has also been showing improved results, its comps remain negative. Industry analyst TDn2K says restaurant industry sales are growing, but the rate is slowing, and in June it turned negative. Now, earnings reports will be lapping months that exhibited stronger sales a year ago.

That may factor into why Chuck E. Cheese's return to public life was killed for now, but how Apollo Global Management extricates itself from this investment remains to be seen.