Nintendo (OTC:NTDOY) recently announced the Switch Lite -- a smaller, cheaper, more colorful version of the Switch -- which releases in September. It seems to be a perfect time to release a budget-friendly version of the popular game system. Through March of this year, Switch has already sold nearly 35 million units and has been enjoying increasing momentum to start the year.

The 3DS was a very successful handheld system for Nintendo, but the Switch is much more capable, given that it can be connected to a TV and played like a console. That's why Nintendo has used the 3DS has an entry-level gaming device for potential Switch owners, and the new Switch Lite stands to pick up that mantle. 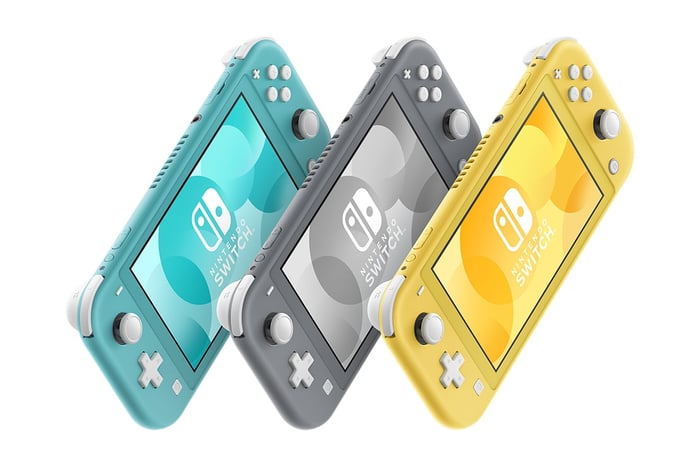 The Switch Lite will be priced at $199 -- two-thirds the price of the Switch. However, the lower price comes with limited features. The Switch Lite cannot be connected to a TV, and the screen size of the Lite version is smaller at 5.5 inches, versus the regular Switch size of 6.2 inches.

Also, the Switch Lite is purely a handheld system, with Joy-Con controllers that are permanently attached to the side of the device, whereas the controllers can be swapped in and out on the regular Switch.

However, the Switch Lite has two features that should appeal to buyers. It is slightly more compact and weighs 0.61 pounds -- significantly lighter than the Switch weight of 0.88 pounds. In addition, the Switch Lite has a longer battery life, typically ranging from three to seven hours, depending on how it's used, which is about a half-hour longer than the regular Switch.

The lower price tag, extended battery life, and compact form factor should prove a winning combo for the Switch Lite.

The cheaper price combined with a Switch version that is dedicated to handheld mode should appeal to 3DS owners who haven't upgraded yet.

In 2017, Nintendo released data showing that most Switch owners use either the system's handheld mode or tabletop mode, or both, while less than 20% keep their Switch connected to a TV. Ever since Switch launched two years ago, Nintendo has marketed the system primarily as a handheld. The Switch Lite essentially doubles down on the main appeal of the system and delivers it at a cheaper price point.

3. Switch Lite is a marketer's dream

Nintendo's decision to release Switch Lite in a range of colors, including yellow, blue, and gray, could prove very successful in driving sales.

The best example of how well this marketing technique can work is Apple's release of the iPod Mini in February 2005 that featured the popular digital music player in a range of bright colors at a lower price point. The cheaper, more colorful iPod helped Apple have a record quarter at the time it was launched.

Investors shouldn't underestimate these little details in helping to drive strong sales of the Switch Lite.

Wedbush upgraded Nintendo stock to outperform after the announcement citing the lower price, smaller size, and color options as an impetus for sales through the holidays. Industry analyst Michael Pachter estimates the Switch Lite will sell 8.5 million units this fiscal year and 11.5 million next year.

The only thing standing in the way of higher sales this year is Nintendo not being able to make enough. Pachter expects demand to outstrip supply through the end of calendar 2018.

In all, Nintendo may have a huge hit in the new Switch Lite.