Nintendo (OTC:NTDOY) has enjoyed something of a comeback over the past five years, helped greatly by the launch of its Switch game system, which has sold an impressive 34 million units since its March 2017 launch. If you had bought shares of Nintendo five years ago, you would have more than tripled your investment. Even if you waited to buy shares until the day the Switch went on sale, you would have nearly doubled your investment by now.

But it's not too late to jump on board. Let's look at the current position of Nintendo and where the company is investing to grow over the next five years and beyond. 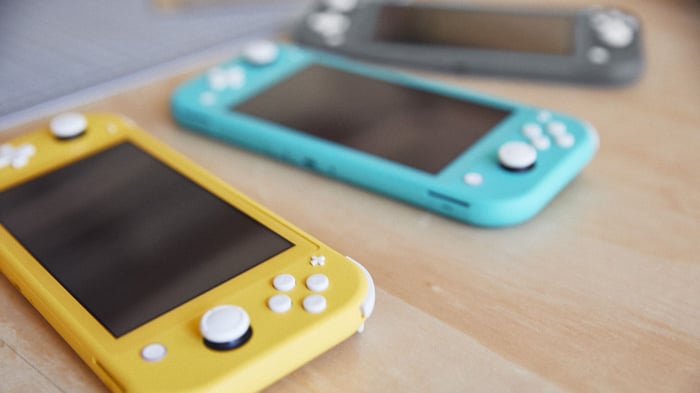 The Switch had a strong start after its launch, but sales didn't show much year-over-year growth in the first half of 2018. However, the combination of marketing and a compelling slate of game releases helped sales accelerate during the second half of 2018. In fact, management recently reported during its first-quarter earnings report that Switch momentum is increasing. Between January and March, retail sell-through of Switch increased 35% year over year.

Not only does Switch offer a vast library of games from both Nintendo's exclusive library and other game companies, it also has been wisely marketed as a handheld. Gamers like the ability to connect the device to a TV or take it with them for portable play.

The Wii, released in 2006, sold over 100 million units during its run and won over people's wallets for its innovative use of motion-enabled controllers. Wii's successor, the Wii U, didn't offer any innovations over the Wii, and sold a disappointing 13 million units, causing Nintendo's sales and stock price to crater about five years ago.

It's safe to say Nintendo learned a valuable lesson from that disaster. The Switch has shown Nintendo is getting back to its clever ways of building hype for its hardware by introducing novel ways to enjoy gaming. The Switch's portability helps distinguish it from Microsoft's Xbox One and Sony's PS4, which are aimed at hardcore gamers.

Nintendo is hoping to keep the Switch momentum building over the next year with the upcoming Switch Lite, which will launch in September at a budget-friendly $200, or two-thirds the cost of the Switch. The lower price brings limited features -- for example, it cannot be connected to a TV -- but it should help further distinguish Nintendo's hardware entering 2020 when Microsoft and Sony are expected to launch new consoles.

I don't think Nintendo will suffer the collapse it did five years ago. Management has learned its lesson and is investing in new services and other areas outside of gaming to reach a wider audience.

One area of focus is digital sales, including subscriptions to Nintendo Switch Online and downloadable games. The digital segment of the business is a priority for Nintendo these days, as it is for the rest of the industry. In fiscal 2019 (which ended in March), digital sales increased 95% and made up about 10% of Nintendo's total sales. The growth here should underpin the cyclical hardware business with a more recurring stream of revenue, which could smooth out Nintendo's sales over time.

Nintendo also has a lot of potential with mobile games, especially for those who enjoy playing classic Nintendo games like the Mario series but don't want to shell out $200 to $300 for a Switch (or Switch Lite). The company has been releasing two or three mobile games per year. Last year, revenue from mobile releases grew 17% and made up just 3.8% of total sales. The next two releases, Dr. Mario World and Mario Kart Tour, should keep that momentum going.

Nintendo is following in the footsteps of other game companies by pursuing adjacent opportunities. These include consumer products, a theme park, and movies. Nintendo said it is building a theme park with Universal Parks and Resorts called Super Nintendo World, which will launch at Universal Studios Japan in time for the 2020 Tokyo Olympics. There is also a Super Mario Bros. movie in development in partnership with the well-regarded animation studio Illumination, which is scheduled for a worldwide release in 2022.

Management has made it clear that these adjacent opportunities only serve to market their gaming brands to a wider audience, which is their primary objective. They say they will continue to rely on hardware and software sales to drive growth.

On the hardware front, there is tremendous potential in the partnership with Tencent to launch the Switch in the untapped market of China this year. The upside could be great, but the outlook is still uncertain. Chinese gamers are heavily into mobile and PC gaming, so there may not be much interest in the Switch hardware. It could help in China if Nintendo markets the Switch as a handheld, especially now that the Switch Lite is close to release.

Nintendo has plenty of irons in the fire

The Switch is enjoying strong momentum right now, which should keep Nintendo performing well for the next few years. At some point, Nintendo will have to release new hardware to keep growing, but the above initiatives across digital sales and nongaming experiences show that management is executing well to grow the audience for its games, and it's doing that by investing in higher margin areas, like digital channels, to grow the value of the company over time.

It's difficult to say exactly what the growth trajectory will look like over the next five years, but Nintendo has plenty going for it to deliver positive returns for investors.