Apple's next effort to catch up might be an investment in original podcasts, according to a report from Bloomberg. Spotify has invested hundreds of millions of dollars buying popular podcasting companies and developing its own original content exclusive to its platform. Spotify's goal is to increase the value of its service without being tied to paying out royalties to record labels.

For Apple, an investment in podcasts will aim to attract customers to its ecosystem of hardware and services -- and keep them there. 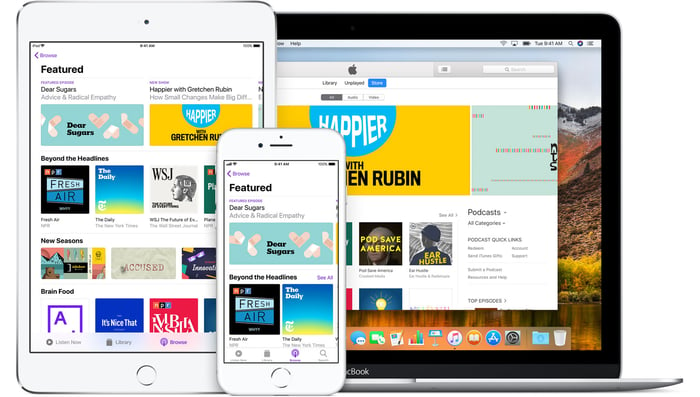 Not giving up its lead in podcasting

The podcast originated on Apple devices. (It's named after this device Apple used to make called an iPod -- ever heard of it?) And the vast majority of podcast listening still happens on Apple devices. The Podcast app pre-installed on iPhones still accounts for 50% to 70% of listening for most podcasts, according to industry executives cited by Bloomberg.

But Spotify is coming on strong. Over the last couple of years, it has built up a base of podcast listeners, and the platform now accounts for 10% to 20% of listeners. Spotify says engagement with podcasts increases overall engagement with its service. That is, it's supplemental to music listening in most cases. On the company's first-quarter earnings call, CEO Daniel Ek said podcasts lead to "lower [subscriber acquisition costs], lower churn, and then higher lifetime value."

Spotify is strongly incentivized to increase engagement with podcasts for all the reasons Ek provided. For Apple, the incentives aren't as clear. It doesn't earn any revenue off the Podcast app. But high engagement with the app could be another reason for consumers to stick with Apple hardware and services.

In the future, Apple might be able to integrate its advertising technology into the Podcast app to help smaller publishers monetize their shows. Spotify plans to offer targeted advertising services for publishers as a way to generate revenue from podcast listening, similarly to how it generates revenue on free music listeners.

Exclusive podcasts may be a key to competing with Spotify for music subscribers. Apple has a great home-field advantage with music streaming. In fact, Apple Music is more popular than Spotify on Apple devices. Where Apple Music falls short is when someone wants to listen to music on non-Apple devices. Apple has been taking steps to make its service more usable across devices, but it still can't compete with Spotify on a more neutral court.

As such, if Apple's investments in podcasts can help attract or retain iPhone and other Apple hardware users, it stands to benefit Apple Music.

And Apple is developing other premium services. It released Apple News+ earlier this year for premium print content. Apple Arcade is a premium mobile gaming subscription set for release this fall. And Apple TV+ is coming later this year with a slate of originals with an estimated budget of around $1 billion.

The first two services are exclusive to Apple's devices, while Apple TV+ is likely to be most popular among Apple device owners as well, despite its broader availability. Podcasts may play only a small role in keeping customers engaged with the Apple ecosystem, but they have become more important for Apple than ever before.