Facebook (NASDAQ:FB) has been working on a payments service in India for over a year. It launched a beta test with 1 million WhatsApp users in early 2018 and finally looks like it's moving forward with the project. In order to launch the service nationwide, Facebook needs approval from regulators, and Bloomberg reports the company is preparing to file its report with the Reserve Bank of India soon.

Getting into digital payments in India is a massive opportunity. Walmart has already seen a massive return on its investment in Flipkart-owned PhonePe, which has seen payment volume quadruple in the last year alone. Paytm remains the market leader in the space despite PhonePe's progress. Still, there's plenty of room for competition. Analysts expect the market for digital payments in India to quintuple by 2023, surpassing $1 trillion.

Given the popularity of Facebook's apps in the country, it has an excellent opportunity to win a large share of that growth if it can gain approval. 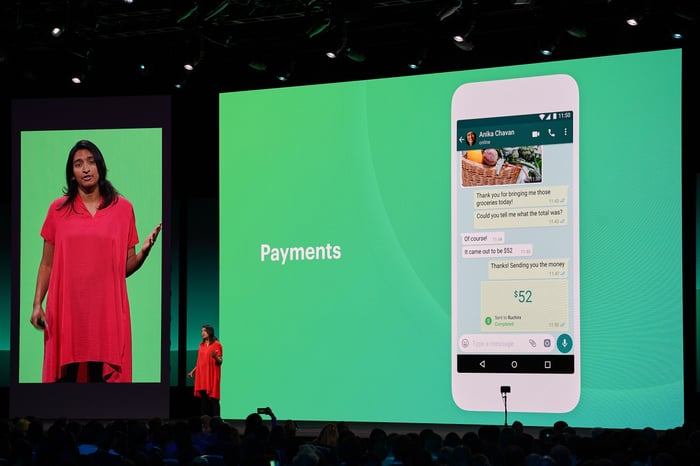 It's unlikely Facebook will look to monetize most transactions directly. Instead, it will probably want to grow adoption as quickly as possible by offering free payment processing for users. It did the same thing for Messenger payments in the United States.

But the company can create a revenue opportunity by increasing the number of businesses that transact through WhatsApp. That's always been Facebook's go-to monetization strategy.

In India, there are already a number of businesses that use WhatsApp to connect users such as MakeMyTrip and BookMyShow. Integrating payments into WhatsApp could make it easier for users to use those services and give businesses a greater incentive to use WhatsApp to reach customers.

That's just low-hanging fruit for Facebook, though. As digital payments become increasingly popular in India, the company has an opportunity to transform its messaging app into the India equivalent of Tencent's (OTC:TCEHY) WeChat (Weixin) in China.

WeChat can be used to pay for everything both online and in person. Not only that, but it allows users to book services like taxis or even doctors' appointments directly in the app. WeChat has become a portal to find and pay for anything one might need and it got there by first being the most popular chat app in China.

Tencent's biggest competitor in China for digital payments is Alibaba, which has the advantage of dominating digital retail, and Facebook may face an even greater challenge in India. The two biggest competitors are Paytm and PhonePe, which are each backed by deep-pocketed companies in Softbank and Walmart -- although Walmart is trying to spin off PhonePe. Amazon and Alphabet's Google are also fighting for their share of the market. Facebook will have to invest a lot to take on the competition, but its popularity should help.

There are a couple of other areas where gaining approval for digital payments could help Facebook. First of all, Facebook is working to grow its Marketplace platform, which competes with digital classified ad services like Craigslist. Giving users an easy way to connect, chat, and pay for items found on Marketplace should give Facebook an advantage over the competition.

Facebook doesn't charge a listing fee for Marketplace, nor does it usually take a piece of each transaction. Instead, it gives sellers an opportunity to promote their listings so they show up higher in search results. The company is just starting to touch on that opportunity, but growing engagement on Marketplace provides more opportunities to sell promoted listings for Facebook.

Another area where WhatsApp payments could help is in Facebook's efforts to launch Libra -- its cryptocurrency. Libra currently faces a regulatory hurdle in India, as the Reserve Bank of India will not approve the use of the banking network for blockchain currency transactions.

Libra's best-use cases are for serving the underbanked and sending money across borders. Both could be particularly useful in India. Considering Facebook's user base in the country, it's a big opportunity. A successful payments service on WhatsApp could help set the stage for approval for certain uses of Libra in India.

Digital payments are an exciting opportunity in India, and Facebook is well-positioned to take share of the rapidly growing market if and when it finally launches. And while the social network likely won't generate much revenue directly from payments, it presents a plethora of ancillary opportunities for monetization.