Badger Meter's (NYSE:BMI) second-quarter report appeared to underscore misgivings investors may have had over a first quarter, which was notable for flat year-over-year revenue. In the last three months, the company saw a rather significant deflation of its top line, though margins held steady. Let's review the flow measurement instrumentation manufacturer's earnings in detail below. Note that all comparative numbers are presented against the prior-year quarter.

What happened with Badger Meter this quarter? 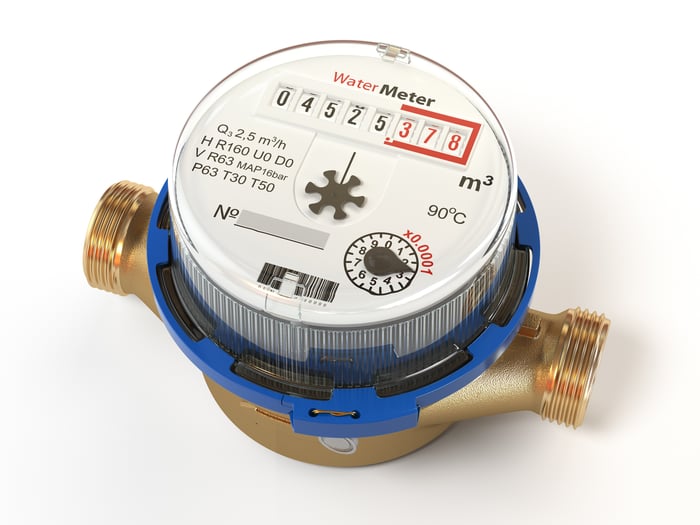 Last quarter, Badger Meter attributed its flat sales to extreme weather in municipal water markets as well as deferred orders as customers awaited new products in the company's E-Series Ultrasonic water meters and ORION Cellular smart water communication endpoints lines. Delayed ordering patterns due to weather should have normalized in the second quarter. However, these sales obviously didn't have much of an impact in the current period. As for deferred purchases of advanced products, this appears to be an ongoing phenomenon, as CEO Kenneth Bockhorst explained in the company's press release:

As a technology leader, we have encountered innovation-driven order postponements during new product launch windows. We believe we experienced that impact during the second quarter as customers, eager to adopt our new leading-edge solutions, are actively pilot testing products prior to systemwide deployment or are awaiting new product releases. While this phenomenon creates sales unevenness in the short-term, we believe being at the forefront of new technologies benefits us and our prudent customers given the long term horizon over which their decisions are based.

Badger Meter doesn't provide forward revenue or earnings guidance. The company did offer some qualitative information on its outlook, affirming that it retains a healthy order backlog and a solid new opportunities funnel on the sales front, "underscored by a high level of interest in [our] innovative smart water solutions."

It may be time for management to provide a quantitative outlook that ties revenue more closely to the cadence of new product releases and the completion of customer product testing. At the moment, it's likely difficult for shareholders to grasp just when the promised sales of next-generation products will lift overall sales. And uncertainty is rarely kind to stock price: Following the earnings release, shares have traded down as much 8.5% in the Thursday session.