The online marketplace is seeing steady sales growth heading into the second half of the year.

Investors were hopeful leading up to eBay's ( EBAY -0.64% ) second-quarter earnings report. The online marketplace had boosted its outlook after surprisingly strong sales growth to start off the fiscal year. That modest success, plus indications that management was preparing to sell underperforming parts of the business, contributed to market-thumping gains for shareholders through the first half of 2019.

On Thursday, eBay sustained that positive momentum by reporting stable sales growth and rising margins. The company also hinted that a few major asset sales could occur sometime in the next few quarters. 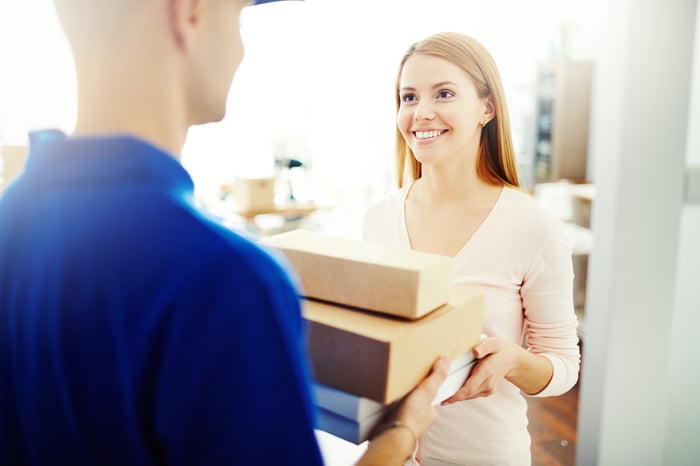 Reported sales ticked higher by just 2% but eBay has a huge international business, so it's more useful to look at currency-neutral revenue changes. By that measure, sales rose 4% to match last quarter's rate.

Those 4% gains might not impress when compared to fully integrated e-commerce giants like Walmart and Amazon. These peers are expanding product sales by more than 20% these days. However, eBay is outperforming expectations given that it has trounced its original 2019 target of 1% growth in each of the last two quarters. Its asset-light selling model means it requires only modest gains to power healthy returns, too.

The growth news wasn't uniformly positive. eBay reported its third straight quarter of falling sales volumes in the U.S. market and a fourth straight slowdown internationally. Higher selling prices helped offset those declines. Meanwhile, its pool of active buyers expanded at the same 4% pace that the company has seen for over a year even though that figure rose 5% as recently as 2017.

eBay's finances only got stronger during the period. The company generated $723 million of operating income, meaning it turned 27% of its revenue into profit. That's up from 25% a year ago and far above the low-single-digit margins that both Walmart and Amazon maintain.

eBay got help in this department from cost cuts and from its highest take rate -- the fee it charges sellers to use its platform -- in over a year. That metric ticked up to 9.4% from 9.3% in the prior quarter and 8.8% a year ago.

eBay's two newest business lines continued to march closer to the point where they will begin contributing materially to reported sales and profits. The payments processing platform grew 40% from the previous quarter and now counts over 6,000 participating sellers. Its internal ads business more than doubled revenue to just under $100 million.

eBay didn't announce final plans to sell either the StubHub or Classifieds segments of the business, but management said in the earnings conference call that it is "actively reviewing the role" of these units in the portfolio. Investors can expect to learn the conclusion of that review sometime in the next few quarters.

In the meantime, eBay continues to see a brighter future ahead. The company's projected core growth rate should be between 2% and 3%, up from the initial predicted range of 0% to 2%. Cost cuts have helped support its second straight upgrade to the profit forecast, too, with adjusted earnings now on pace to land between $2.70 and $2.75 per share compared to last quarter's range of between $2.64 and $2.70 per share. The improving sales and earnings outlook implies eBay is finding ways to attract more buyers and sellers to its business, with faster volume growth likely to follow.