Kinder Morgan (NYSE:KMI) delivered somewhat mixed second-quarter results. While its core natural gas pipeline business generated strong growth, it ran up against headwinds in each of its other segments during the second quarter. Those factors caused its overall results to come in slightly below expectations. However, the company remains on track to achieve its full-year cash flow forecast.

While DCF increased, it came in just under the company's budget of $1.15 billion, or $0.51 per share. Meanwhile, EBITDA slipped due to weakness in all but the natural gas segment: 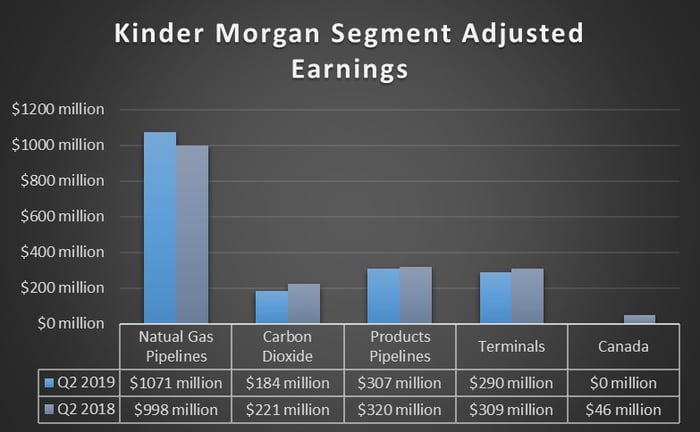 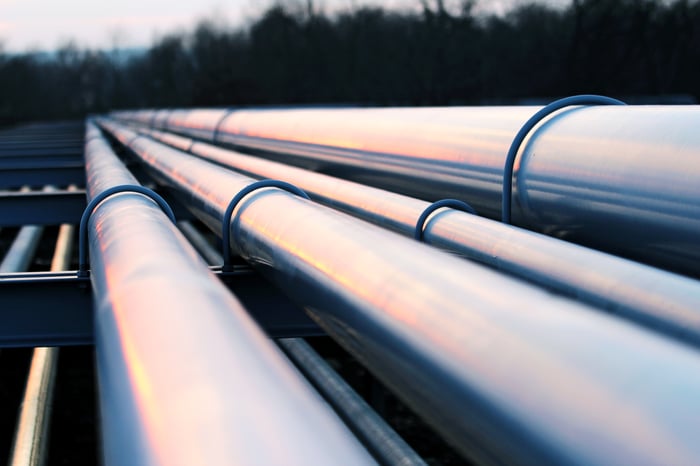 Overall, Kinder Morgan generated solid second-quarter results, which were roughly in line with the year-ago period and only slightly below its budget. The company produced significant free cash flow during the quarter. That enabled the pipeline giant to cover its dividend -- which it boosted 25% last quarter -- with more than half a billion dollars to spare. Because of that, the company was able to maintain its "discipline by continuing to fund growth capital through operating cash flows without accessing capital markets," according to CEO Steve Kean.

One of the unexpectedly weak spots, according to Dang, was "contributions from the terminals segment's bulk business [which] were down compared to the second quarter of 2018, on lower volumes across several key commodities, including petroleum coke, steel, and coal." Another noteworthy issue on the quarter was that Kinder Morgan's Elba Liquefaction project is behind schedule. The company had expected to start up the first liquefied natural gas (LNG) train in May. However, it's in the advanced stages of the commissioning and start-up process.

Kinder Morgan initially expected to generate $7.8 billion in EBITDA this year. However, the Elba delay, when combined with lower NGL prices, weakness in the terminals business, and other issues, has it on track to finish slightly below budget. On a more positive note, the company does expect DCF to be on budget at $5 billion, or $2.20 per share, thanks to lower interest rates.

The company also said that it would likely invest slightly less than the $3.1 billion it budgeted for capital projects. That's entirely due to lower spending in its carbon dioxide segment. However, the company also noted that it added $400 million of new projects to its backlog, bringing its year-to-date total to $1 billion. That's a bit below the pace of its expectation that it will secure $2.5 billion to $3 billion of new projects each year.