Qualcomm's (NASDAQ:QCOM) antitrust woes aren't going away anytime soon, even if the U.S. Department of Justice is trying to pause enforcement of a court ruling that the mobile-chip giant needs to change its ways. The latest penalty comes from the European Union, following an investigation by the European Commission over business practices from a decade ago. Regulators allege that the company engaged in "predatory pricing" with 3G baseband chips, which undermined competition and ultimately harmed consumers. 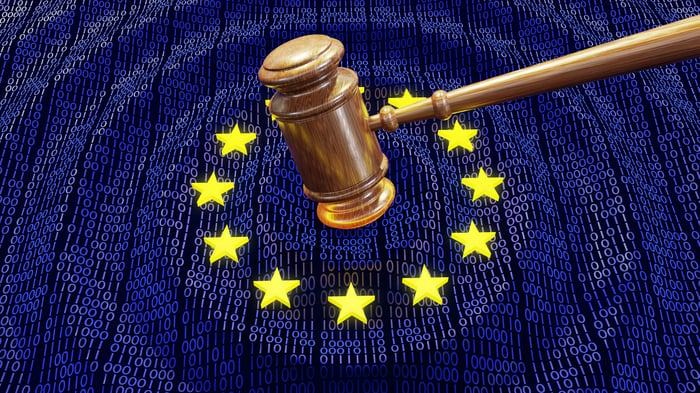 The commission has now imposed a fine of 242 million euros ($272 million), representing approximately 1.3% of Qualcomm's revenue in 2018, for abusing its dominant position in the market for 3G modems. Between mid-2009 and mid-2011, Qualcomm sold chips below cost to prominent customers Huawei and ZTE in order to drive rival Icera out of the market, according to the commission.

At the time, Icera was starting to gain traction and become a viable rival, and regulators concluded that "Qualcomm's conduct had a significant detrimental impact on competition." The commission notes that while it's not illegal to acquire market dominance -- Qualcomm had an estimated 60% market share at the time, while its closest competitor had a roughly 20% share -- companies do have a responsibility not to abuse that dominance to restrict competition.

"Qualcomm sold these products at a price below cost to key customers with the intention of eliminating a competitor," Commissioner Margrethe Vestager said in a statement. "Qualcomm's strategic behaviour prevented competition and innovation in this market, and limited the choice available to consumers in a sector with a huge demand and potential for innovative technologies."

Near the end of the time period in question, rival chipmaker NVIDIA said it would acquire Icera's baseband and RF assets for $367 million in order to take a shot at the modem market. NVIDIA's efforts would largely fizzle out as well, and it wound down Icera's modem operations in 2015.

Of course, Qualcomm will appeal the decision. "The Commission spent years investigating sales to two customers, each of whom said that they favored Qualcomm chips not because of price but because rival chipsets were technologically inferior," Qualcomm General Counsel Don Rosenberg said in a statement announcing the company's intention to appeal. "This decision is unsupported by the law, economic principles or market facts, and we look forward to a reversal on appeal."

Last year, the commission had imposed a separate fine of 997 million euros ($1.11 billion) over Qualcomm's exclusivity deal with Apple, the largest buyer of stand-alone modems, which undermined Intel's ability to compete in the modem market. Qualcomm similarly appealed that decision to the General Court of the European Union, which has yet to make a ruling in that case.