If you've seen one Starbucks (NASDAQ:SBUX), you haven't seen them all -- but you're close. Like many restaurant chains, the coffee giant only has a few store formats, and they don't vary that much. There are full-service stores (some with drive-thrus), kiosks, and some express models without seating, usually to be found in dense urban environments.

But times change, and to adapt to them, the chain is trying something a bit different with its first Starbucks Now store, which it recently opened in Beijing. The new format combines "the signature Starbucks café environment with Mobile Order & Pay and Starbucks Delivers customer experiences," according to a press release. Essentially, this version of the cafe has been designed around the needs of three distinct sets of clientele: the chain's traditional customers; people who order and pay via its app; and delivery service workers picking up orders.

"The Starbucks Now store is a testament to our unwavering commitment to delivering innovative customer experiences through new retail formats," said Starbucks China COO Leo Tsoi in a press release. "This new retail format and design approach provides us with a platform to offer customers a fast and convenient retail experience to suit their on-the-go lifestyle." 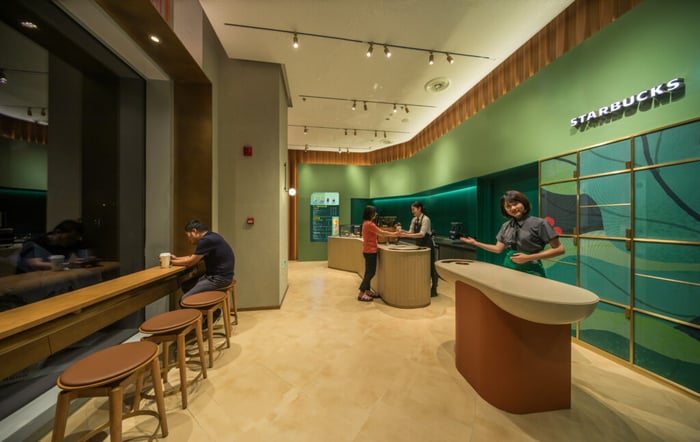 How is this store different?

This innovative format debuts at a time when Starbucks faces a serious challenge in China from fast-growing Luckin Coffee (OTC:LKNC.Y). That upstart chain has built its model around digital ordering via a well-regarded app, fast service, and delivery -- its stores have no seating at all. It had more than 2,400 stores in China when it went public in May, and it has big plans to expand from there. Starbucks Now clearly is (at least in part) an attempt to counter this new rival's growth by making it easier for every type of Starbucks customer to get their orders faster.

The current Starbucks stores were largely designed before mobile order and pay or delivery became part of the chain's offerings. In some cases, this has led to awkward setups, with large crowds clustered together in the order pickup area waiting for their drinks and food.

Starbucks Now has been designed to more-smoothly accommodate every type of order supported by the store. It also has a curated beverage menu "tailored for the on-the-go customer along with an assortment of popular food items." The store does have a limited amount of seating, but it's mostly built for customers or delivery people who will be getting their orders and leaving.

The store has a dedicated area for delivery workers to pick up their orders. This includes a "safe and secure in-wall system with a designated pickup portal associated with each order," according to the press release.

This initial Starbucks Now location will serve as a delivery hub for its region, which will relieve neighboring stores of that responsibility. And it has a separate preparation area for mobile orders, which should allow it to produce them without slowing down in-store customers. In theory, that means that not only will customers in the Now store get efficient service, but those walking into nearby stores should get their orders faster too, since those stores' baristas won't be making orders for delivery.

The company says it plans to bring the Starbucks Now format to "high-traffic areas including business and transportation hubs as well as to new cities in China." But it has not yet revealed any plans to debut it in the United States.

Mobile ordering and payment has become an increasingly large part of the Starbucks model, as has delivery via third-party services. The  new format it's testing is an acknowledgement of that, but one that also addresses the needs of its core customers who are just looking to get their caffeine fix quickly and be on their way.

This model acknowledges that it makes sense to create dedicated spaces for its different clienteles. That's an idea the chain has subtly integrated into newer U.S. stores, which often feature more space for customers to wait for mobile orders, and sometimes include separate pickup areas for online and in-store orders.

While Starbucks Now might only exist in China at the moment, the chain will use it to test concepts that no doubt will find their way back to its home market. Evolving to meet people's changing needs is just smart customer service -- and the less time we spend waiting for our lattes, the better.

With Starbucks Now, the Coffee Chain Tests a Model for the App Era @themotleyfool #stocks $SBUX $LKNC.Y Next Article
Current