There's a new space race among billionaires that are eyeing the stars, from Elon Musk's SpaceX to Jeff Bezos' Blue Origin, among others. One common theme that the business magnates have expressed is concern about climate change and long-term sustainability of human life on Earth. For example, Musk has long argued that humans must become multiplanetary to survive as a species. Bezos echoed that sentiment this week in an interview with CBS Evening News.

CBS NEWS EXCLUSIVE: @JeffBezos wants his space tourism company Blue Origin to be "an instrumental part" of an American return to the Moon; alongside Amb. Caroline Kennedy, he tells @NorahODonnell that space exploration is critical to our survival. https://t.co/XMXbEkrN86 pic.twitter.com/hNfBVIlF6i

We humans have to go to space if we are going to continue to have a thriving civilization. We have become big as a population, as a species, and this planet is relatively small. We see it in things like climate change and pollution and heavy industry. We are in the process of destroying this planet. 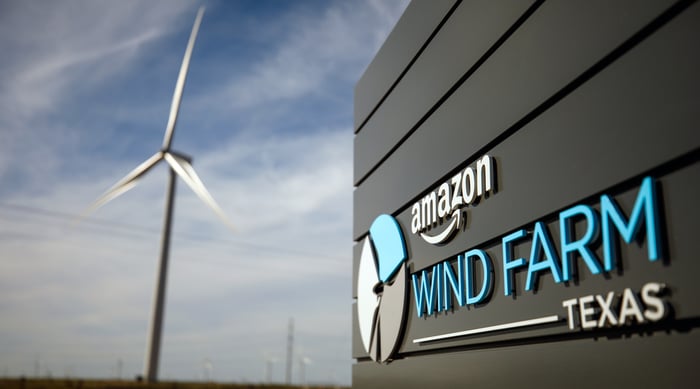 Amazon is making progress in going green, but could still be doing more. Image source: Amazon.

Lagging its peers in sustainability

Compared to other major tech giants, Amazon has dragged its feet when it comes to sustainable energy. It wasn't until 2014 that Amazon finally committed to a goal of using 100% renewable energy in its global infrastructure, following mounting pressure from environmental groups like Greenpeace. To be clear, green energy initiatives are expensive and take many years to implement, which is why it's important to start sooner rather than later.

In contrast, Apple ( AAPL -1.17% ) achieved 100% renewable energy across all of its data centers in 2013, before Amazon even started trying to go green. The Mac maker proceeded to hit 100% renewable energy across all of its operations -- including retail stores, data centers, and all corporate facilities -- in early 2018 and is now turning toward getting its suppliers on the sustainable energy train.

Amazon says Amazon Web Services used roughly 50% renewable energy in 2018, but Greenpeace released a report earlier this year accusing Amazon of wavering on its commitment. Gizmodo noted in April that AWS has been actively wooing the fossil fuel industry, which may complicate its motivations.

Beyond data centers and corporate facilities, Amazon faces a challenge with renewable energy that its peers don't. Transportation generates copious amounts of greenhouse gas emissions -- nearly 30% of all emissions in the U.S.,according to the EPA -- and as Amazon continues to expand its in-house delivery and logistics operations, those operations are unable to rely on renewable energy. Electric cargo planes don't exist yet.

Still, Amazon could be more aggressive in transitioning data centers and corporate offices to renewable energy, particularly if the richest man on the planet wants to put his money where his mouth is.