The market for heating, ventilation, and air-conditioning system equipment is closely tied to the health of the overall economy, and both commercial customers and homeowners turn to Watsco (NYSE:WSO) to help them get the equipment they need. Yet the HVAC business is also a seasonal one, and demand can be very much tied to weather conditions during a given season.

Coming into Thursday's second-quarter financial report, Watsco investors had hoped that the company would be able to rebound from some recent difficulties stemming from unusual winter weather conditions. Watsco did post record revenue, and even though the last month of the quarter weighed on its growth, the HVAC specialist believes that the summer looks bright. 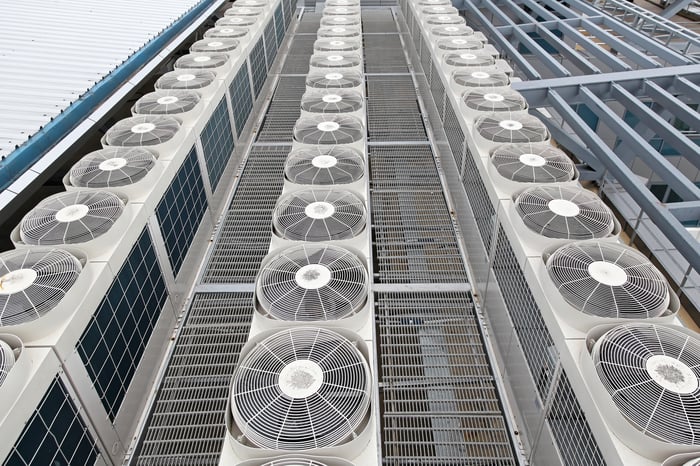 Watsco looks to heat up its business

Watsco's second-quarter report bounced back from exceptionally slow growth in the previous quarter, but top-line gains still weren't as big as they've been in the more distant past. Sales climbed 3% to $1.37 billion, which fell just short of the consensus forecast among those following the stock. Net income of $82.6 million was flat from year-ago levels, and the resulting earnings of $2.40 per share didn't come close to matching the $2.55 per share that most investors were looking to see.

The good news for Watsco was that its key HVAC equipment segment saw accelerating growth. Revenue for that division climbed 3%, with Watsco seeing an even stronger 4% rise in residential equipment sales. Expansion did play a key role in fostering that growth, though, as same-store sales were up just 1% from the year-ago period.

Unfortunately, Watsco continued to see modest declines in its other segments. HVAC product sales, which make up more than a quarter of the company's overall revenue, dropped 2% during the period, matching last quarter's decline. The small commercial refrigeration products division saw a more modest 1% sales decline.

Watsco said that weather played a role in the company's overall performance. Despite strong results from the first two months of the quarter, cooler and wetter weather in June weighed on the business in some of its key markets.

Watsco also struggled with its internal efficiency. Gross margin was slightly lower from year-ago levels, and a 5% rise in overhead expenses was a primary contributor in causing a 2% drop in operating profit year over year.

CEO Albert Nahmad was generally happy with the company's results. "Watsco's second-quarter performance produced the highest sales and net income of any quarter in our history," Nahmad said, "despite weather conditions and strong earnings comparisons of a year ago." The CEO highlighted the acquisitions that Watsco has made in order to boost its growth, and the company hopes to find other such opportunities in the future.

Watsco believes that it should be able to rebound from a tough finish to the second quarter. The company reported that sales momentum has rebounded in July, and that has Watsco optimistic that it can reach record results for the full year. With considerable new investment in opening new locations and expanding its use of technology to help its sales and service teams, Watsco is working hard to maximize its growth opportunities.

The most recent move that Watsco made came at the same time that it released its financial report. The acquisition of the HVAC business of Peirce-Phelps will add to Watsco's coverage of the mid-Atlantic region, as Peirce-Phelps currently serves 9,000 contractors from its 19 locations across Pennsylvania, New Jersey, and Delaware. With sales of more than $200 million, the latest purchase will add to the boost that Watsco has already gotten from other recent acquisitions.

Watsco investors weren't entirely happy with the latest weather woes, and the stock fell 1.5% on Thursday following the announcement. Yet over time, changing weather patterns are likely to force more customers to consider HVAC equipment upgrades, and that could keep Watsco in a fast-growing segment of the economy for years to come.