Curaleaf is buying expansion with its $875 acquisition of Grassroots. Meanwhile, OrganiGram reported Q3 results, and Aurora Cannabis had a good news/bad news week.

It was wheeling and dealing time for certain marijuana stocks this past week, with notable companies in the sector acquiring assets and winning tenders. On the down side, a recommendation cut from a high-powered investment bank dampened the market's enthusiasm for the victor in said tender offer.

In other words, it ended up being another eventful week for marijuana stocks. Let's pick through the most important happenings. 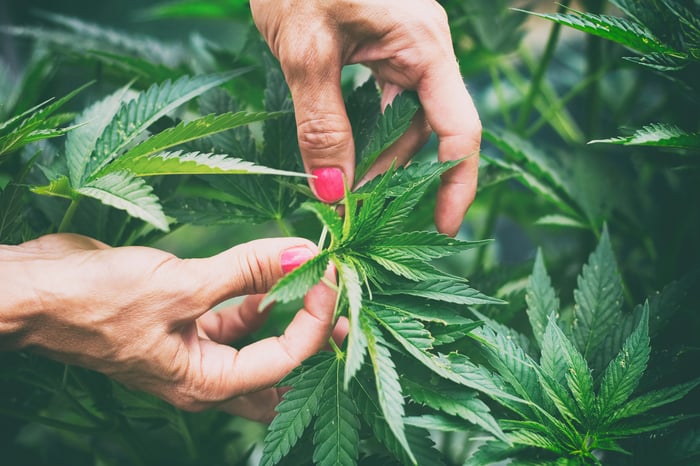 For many marijuana companies, the name of the game is scale. The latest in a rapidly growing list of pot sector acquisitions was announced on Wednesday: Curaleaf Holdings' (CURLF 7.38%) $875 million purchase of Chicago's GR Companies, doing business as Grassroots.

The purchase, which Curaleaf expects to close in early 2020, substantially ramps up the buyer's presence. Curaleaf said that by owning Grassroots' assets, it will hold 131 dispensary licenses (68 of which are in actively operating locations), 26 processing facilities, and 20 cultivation sites. The deal also expands its geographic reach as the combined entity will be active in 19 states. Curaleaf's current count is 12.

Investors should welcome this news as it shows that Curaleaf is effectively maintaining its acquisitions-to-build-size strategy, even if $875 million isn't exactly under-the-mattress spare change. Grassroots is a juicy asset, given the number of dispensary licenses it holds and its complementary geographic footprint.

OrganiGram flips to a loss in Q3

OrganiGram's bottom line was hit  by one unusual factor -- the company's use of a new, previously untried cloning method. It seems that this method was effective at first but not consistent when used for a large selection of plants. According to the company, utilizing this method and then pivoting back to its traditional technique increased its cash expenses by nearly 50% during the quarter and negatively affected profitability.

Analysts had collectively been expecting gross revenue of CA$29.7 million. OrganiGram's beat in this line item might have eased investor worries about the net loss. Speaking of that, the average prognosticator estimate for that line item was a CA$0.03 per-share profit.

The clone method experiment wasn't all that harmful at the end of the day, while OrganiGram's revenue figures are very much headed in the right direction. Investors shouldn't focus much on that bottom-line flip. At any rate, at just over CA$10 million, the loss is relatively modest.

Aurora Cannabis: One win and one loss

The hot was the company's winning a tender held by the government of Italy for the supply of medical marijuana to the country. In the contest, which featured five companies bidding for the job, Aurora was the only one that made it to the final round. It was therefore awarded a contract for the work and will provide at least 400 kilos of medical marijuana under the arrangement's two-year term.

The cold came just after the company made the announcement. Several media outlets reported that Bank of America Merrill Lynch had cut its recommendation on the stock from buy to neutral. Analyst Christopher Carey said the chop was due to Aurora's quick cash-burn rate, which he believes could make the company cash flow negative by as soon as Q1 2020.

Although Aurora stock traded down on the latter news, its price drop was not steep. Perhaps the glow of victory in the Italian tender offer was almost strong enough to mitigate the concerns raised by Merrill. While it's a pleasing win, Carey's evaluation of the company's cash position is accurate, so shareholders should keep a wary eye on how Aurora addresses the situation.