Please ensure Javascript is enabled for purposes of website accessibility
Free Article Join Over 1 Million Premium Members And Get More In-Depth Stock Guidance and Research
By Steve Symington - Jul 19, 2019 at 9:00AM

This tech leader has become so much more than "just" internet search.

It certainly didn't help when the stock slumped yet again early last month following reports the U.S. Justice Department was readying a fresh antitrust probe into the tech titan. Or when, earlier this week, President Trump pledged to look into allegations by Facebook board member Peter Thiel that Alphabet should be investigated for "treason" for its ties to China.

Of course, we'll be listening closely for any color Alphabet management provides to those ends. But in the meantime, let's not lose sight of what really matters -- that is, the performance of Alphabet's core businesses when its second-quarter report hits the wires next Thursday, July 25. 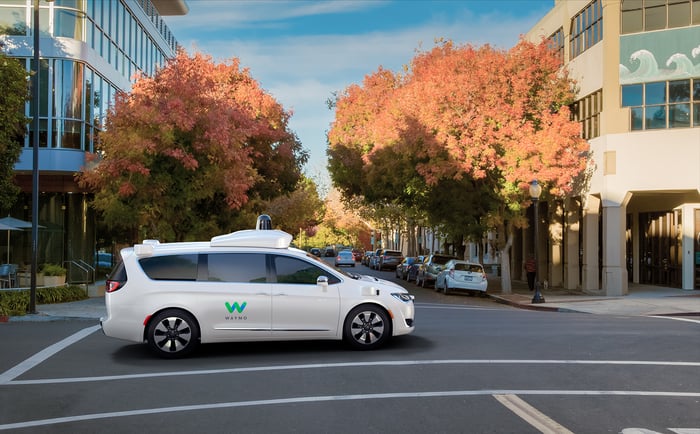 First, note Alphabet does not provide specific quarterly financial guidance. So, for perspective -- and while we don't usually pay close attention to Wall Street's demands -- most analysts are modeling second-quarter earnings of $11.33 per share on a 16.9% increase in revenue to $38.17 billion.

Alphabet will also break its results down into two primary segments: Google, which generates the vast majority of its revenue and all of its operating income; and "other bets," a conglomeration of early-stage, high-potential businesses.

Within Google, the health of the broader digital-advertising industry will prove paramount -- ad revenue last quarter rose just over 15% to $30.72 billion, driven by products ranging from Google Search to YouTube and Gmail. Alphabet will further break this total down into ad revenue from Google's own properties (up 16.7% last quarter to $25.68 billion), and sales generated by its network members' sites (up 8.5% to $5.04 billion in Q1). And investors should also look for growth in traffic acquisition costs (TAC) to lag that of its ad-revenue growth; last quarter, TAC climbed 9.1% and represented around 22% of Google's total ad sales.

Meanwhile, don't be surprised if the "other bets" segment remains profoundly unprofitable; it incurred a whopping operating loss of $868 million last quarter on revenue of $170 million. As it stands, sales for "other bets" are largely driven by Alphabet's Fiber high-speed internet service and Verily life sciences products. But "other bets" also includes companies like Waymo, the self-driving vehicle subsidiary that not only surpassed 10 billion simulated autonomous miles last month, but also recently expanded its reach to make self-driving vans available to Lyft riders in the Phoenix, Arizona, area.

Here again, don't hold your breath for Alphabet to tell us exactly what its revenue or earnings will be in the coming quarters. Rather, listen during next week's conference call for any high-level comments on industry trends, product changes that might impact growth (at least in the near term), or possible macroeconomic and regulatory headwinds.

Three months ago, for instance, Alphabet CFO Ruth Porat noted foreign currency exchange made a surprising swing, from serving as a tailwind in early 2018 to being a significant headwind to both revenue growth and operating income early this year. Assuming those trends didn't unexpectedly abate -- and they haven't given the strong U.S. dollar -- she also suggested currencies would remain a headwind through at least the first half of the year. Porat added that Google recently implemented strategic changes to its ads products that significantly improve the advertiser and user experience, but could negatively impact year-over-year growth rates in the short term.

In the end, however, what's most important is that Alphabet remains confident in its ability for (and continues its long-standing habit of) allocating capital to the most attractive opportunities for driving incremental long-term growth. Until that changes, I suspect a single quarterly report will be unlikely to contain any thesis-changing news that might deter patient, long-term shareholders from holding the stock.