The market reacted irrationally to news that the meal kit maker would offer the popular plant-based burgers.

When a business is circling the drain the way Blue Apron ( APRN -3.07% ) is, it will grasp at any lifeline to help make itself look relevant or healthier. The meal-kit company's recent 1-for-15 reverse stock split was just such an attempt -- and by artificially boosting its share price above $1 a stub, it allowed the company to avoid being delisted from the New York Stock Exchange.

Partnering with plant-based meat producer Beyond Meat ( BYND -4.08% ) is another. The announcement that Blue Apron would be offering Beyond Burgers in its meal kits is an effort to hitch its wagon to the faux-meat maker's rising star, even though it changes absolutely nothing at the struggling company. 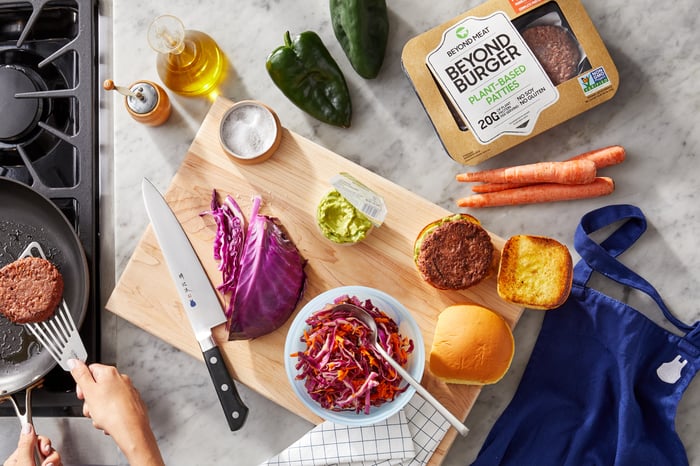 The market has no beef with plant-based burgers

Beyond Meat is generating a cult-like attraction at the moment, so much so that it has found it difficult to keep up with demand for its meat alternative as restaurants chains such as BurgerFi, Carl's Jr., Del Taco, and TGI Friday's have added it to their menus. Its shares have soared almost 700% from their $25 IPO price, making it the best performing new issue of 2019 (though there are many reasons why its current high valuation might not be sustainable).

So it's understandable that Blue Apron might want to take advantage of Beyond Meat's halo effect. Unfortunately, the addition of a non-meat burger patty to its offerings -- however tasty it might be -- is unlikely to make much difference for the company, and its other vegetarian offerings don't attract many customers. This is not some magical deal that will suddenly cause millennial wannabe chefs to start ordering meal kits.

Blue Apron is right to try, though it won't matter

The number of paying Blue Apron customers plunged 30% in the first quarter to 550,000, well below the 1 million it had at its peak. That the shrinkage was by design, as Blue Apron decided to stop spending heavily on trying to attract new customers and focus instead on serving its existing ones, will be cold comfort to shareholders. The strategy virtually ensures it will remain little more than a tiny, niche business.

There is nothing in the Beyond Meat partnership that is likely to get significant numbers of new customers to sign up for the service, let alone stay around after their trial periods end. A Blue Apron meal kit is still a much more expensive option than ordering the popular animal-free meat in a restaurant or just buying it at the supermarket.

That's not to say this wasn't a smart move for Blue Apron. Menu innovation and extension should very much be key strategies for the meal kit maker, even if only in service of its existing customers. And a few more people might try out the delivery option because it saves them the trouble of going to the store.

Blue Apron has been trying a number of initiatives to make its meal kits more relevant to home chefs, such as same-day and on-demand delivery options. A meatless burger that is proving to be a popular restaurant item should certainly be among its offerings.

Investors, though, should realize that by itself, a faux-meat patty won't turn a declining business around -- though based on the market's initial reaction to the news, which sent Blue Apron's shares soaring by more than 40% -- you might think otherwise. Among the  meal kit company's deeper problems are that its delivery business model has turned out to be inefficient and costly, and that the concept has been commoditized by supermarkets offering their own branded meal kits at lower cost. A fake meat burger can't address those issues -- which helps explain why the stock has given back most of that initial price spike.

Better ways of getting you meatless meat

Because going to the grocery store is still the preferred method of food shopping for consumers, the meal kit purchase option that will make the most sense for people is to pick them up from a supermarket's refrigerated section. Their availability in stores further undermines Blue Apron's business.

It's only a matter of time before reality fully hits Blue Apron's investors again, and then it won't matter that there is a plant-based burger on the menu they can sink their teeth into.