Here are AbbVie's grades on its previous acquisition deals. And they look ugly overall.

You can't predict the future by merely looking at the past. But the past does give clues that help us make educated guesses about what the future might hold.

AbbVie ( ABBV 1.69% ) announced in June that it plans to acquire Allergan ( AGN ). Many immediately panned the deal as a $63 billion mistake. Others were more optimistic about the transaction. These views were primarily based on the acquisition's price tag and the known pros and cons for Allergan.

However, there are many unknowns associated with buying a biopharmaceutical company. Evaluating a purchase involves digging into the target company's pipeline to try to determine how much value it might bring. That requires considerable expertise.

This isn't the first acquisition for AbbVie. Could the company's previous deals provide some insight into how adept AbbVie's team has been at identifying the real value of potential acquisition targets? I think so. With this in mind, I developed a report card of AbbVie's acquisitions to identify the possible implications for the Allergan deal. And based on what I found, investors have reason to worry. 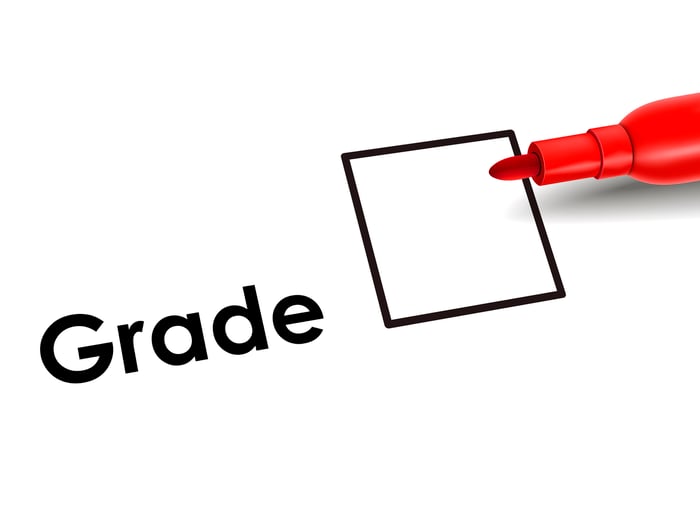 AbbVie was spun off from Abbott Labs in 2013. Since then, the company has initiated five acquisition deals. Here's AbbVie's acquisitions report card:

This obviously doesn't include very many transactions. I also looked at relevant acquisitions made by Abbott Labs in the five-year period leading up to its spin-off of AbbVie. Several of AbbVie's top executives were with the company during this time, including CEO Rick Gonzalez.

Abbott made only one acquisition during this period that involved what would later become AbbVie. In 2010, the healthcare giant bought Facet Biotech for $450 million. If we included this deal in AbbVie's report card, I think the company would have another grade of D.

Let's look at why I assigned those grades to each of AbbVie's acquisitions.

Shire: AbbVie ultimately threw in the towel on the transaction after the U.S. Treasury Department issued new rules that diminished the tax advantages of buying companies based in Ireland and other countries with low tax rates. However, I think AbbVie deserves a grade of D because it had to pay a $1.64 billion breakup fee. Also, Shire was later acquired in 2018 by Takeda for $62 billion. If we assume that the price tags in 2014 and 2018 were fair, Shire's value increased by a compound annual growth rate (CAGR) of only 3% or so. Had AbbVie completed the acquisition, it arguably wouldn't have paid off very much. I almost gave the company an "incomplete" grade on this deal, but I think AbbVie really deserves a D.

Pharmacyclics: AbbVie had a solid win with this acquisition. Pharmacyclics' cancer drug Imbruvica has generated sales of nearly $9.8 billion. Market researcher EvaluatePharma projects that Imbruvica will be the No. 5 best-selling drug in the world by 2024, with annual sales of $9.5 billion (note, though, that Pharmacyclics' partner Johnson & Johnson will take part of those sales). Although AbbVie's purchase of Pharmacyclics hasn't paid off yet, it will over the long run. It also gives the company a solid presence in oncology that should help it in marketing other cancer drugs such as Venclexta. That's enough to warrant a solid B for the deal in my view.

Stemcentrx: AbbVie's executives sang the merits of experimental cancer drug Rova-T when the Stemcentrx buyout was announced in 2016. But by 2018 they were singing the blues. Rova-T flopped in clinical studies. Those flops give AbbVie a big fat F on this deal.

Allergan: The proposed acquisition isn't finalized yet, so AbbVie obviously can only receive a grade of "incomplete" on the Allergan buyout at this point.

Mavupharma: It's too early and there's not enough information available about this acquisition to assign a grade, so AbbVie got another "incomplete" on the Mavupharma purchase.

Facet Biotech: Abbott acquired Facet primarily to get experimental multiple sclerosis drug daclizumab. The drug won FDA approval in 2016 and was marketed under the brand name Zinbryta. In 2018, however, AbbVie and partner Biogen withdrew Zinbryta from the market because of safety concerns. The only candidate gained in the Facet deal that could still have potential is cancer drug veliparib, which is being evaluated in late-stage clinical studies. However, the drug failed to meet primary endpoints in two late-stage studies targeting treatment of squamous non-small cell lung cancer (NSCLC) and triple-negative breast cancer. This acquisition is at best a D for AbbVie.

Implications for the Allergan acquisition

There are three key things for investors to note with AbbVie's acquisitions history:

None of this instills much confidence in AbbVie's skill in making acquisitions. This doesn't necessarily mean that acquiring Allergan won't work out for AbbVie over the long run. But if we assigned AbbVie an overall grade on its acquisitions prowess, I think the company would squeak by with a D. That's a poor grade considering that AbbVie is moving forward with the biggest acquisition in its history.