You can't say that Skechers (NYSE:SKX) is boring during earnings season. For the sixth quarter in a row, shares of the footwear maker staged a double-digit percentage move on earnings news. Thankfully for shareholders, it was a positive move this time around.

Skechers stock moved 12% higher on Friday after posting better-than-expected financial results. Sales clocked in at $1.259 billion for the second quarter, a 10.9% gain that would've been a 13.7% increase on a constant currency basis. More importantly, Skechers was only targeting a 5% to 7% uptick for the period back in April. 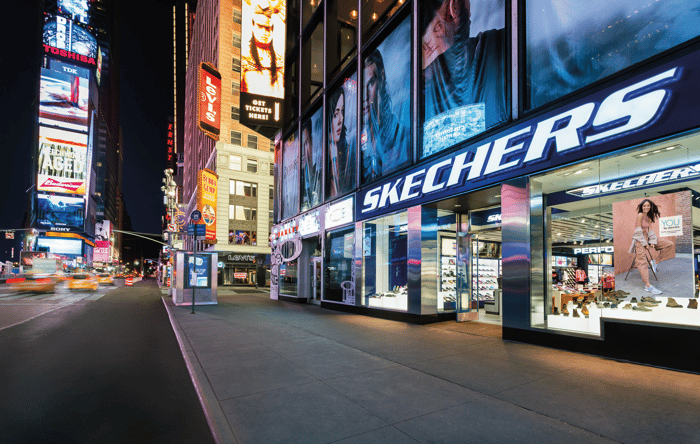 The report follows the pattern we've seen over the past couple of years, with overseas sales growing faster than its domestic operations and its stateside wholesale business continuing to be a laggard. International sales soared 19.8% for the second quarter, now accounting for 55.7% of the revenue mix. Skechers' direct-to-consumer business rose 14.4%, with comparable same-store sales rising 4.2% domestically and 6.7% internationally.

Outside of the 3.8% decline for its domestic wholesale business, it was a period of robust top-line growth, and the news gets even better on the bottom line. Net earnings per share rose 69% to hit $0.49 a share, well ahead of the $0.30 to $0.35 that it was modeling in per-share profitability. The reported profit soared despite a slight contraction in gross margin, as the walking and athletic footwear giant had to settle for some promotional discounting to clear out seasonal merchandise in some international markets. Skechers was able to more than make that up with tighter cost controls on the way down, including a reduction in advertising that resulted in SG&A costs to trail its top-line growth and the widening of its operating margin.

The blowout bottom-line growth was partly helped by some one-time items holding back the prior year's results, but earnings from operations still climbed at an encouraging 36.5% clip. The quarter was more than enough to wash away negative memories of its disappointing first-quarter performance, a report anchored by Skechers' weakest quarterly sales growth in seven years.

Double-digit growth could be here to stay in the near term. Guidance for the current quarter calls for $1.325 billion to $1.35 billion in sales, a 12% to 14% increase over last year's third-quarter results. The $0.65 to $0.70 that Skechers is forecasting in diluted earnings per share is also a modest double-digit percentage increase from the $0.58 it scored a year earlier.

Investors who are long Skechers won this round. It's also a safe bet that the shares will be volatile once again when the global footwear player steps up with its next earnings report in three months.