The Marvel Cinematic Universe film series has been a massive success for Disney (NYSE:DIS). And it's looking capitalize on that success by interweaving exclusive original Marvel series for Disney+ with the films.

The next phase of Marvel films will begin next summer with Black Widow, and in the fall Disney will release a new series, The Falcon and the Winter Soldier, exclusively on Disney+; 2021 will feature three additional Marvel series on the new streaming service.

Unlike Disney's planned Star Wars series, The Mandalorian, or other Marvel television series, these new Marvel series' plotlines will be intertwined with the ongoing saga of the Marvel films. So, fans of Marvel will need to pay an extra $70 per year in order to stay up to date on the latest happenings in the Marvel Cinematic Universe. 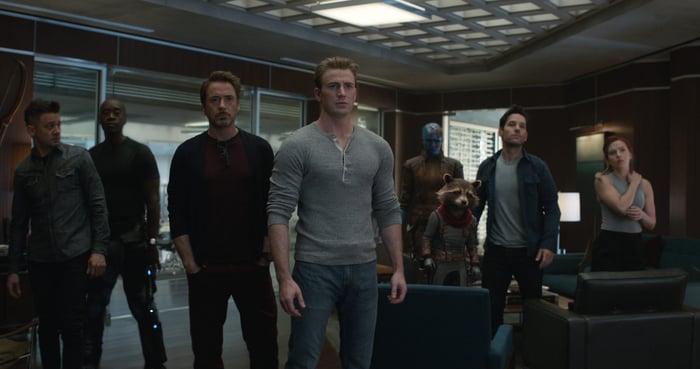 Capitalizing on its biggest fans

The four Avengers films all fall within the top 10 highest grossing films of all time. The latest story, Avengers: Endgame, just set a new record for global box-office sales. Even as people have more reason than ever to stay home for their entertainment, Disney's Marvel movies are exceptional at getting consumers off of their couches.

Extending storylines beyond the big screen takes Disney's popular intellectual property strategy a step further. While fans may be interested in other Marvel content, they'll be more compelled to sign up for Disney+ and watch these series, since they'll enhance the experience when fans go to see the next Marvel film in theaters.

It's a strategy uniquely suited to the sprawling Marvel universe Disney has developed over the past decade. No other company has the intellectual property and fanbase to develop series that can stand on their own and play a role in a greater story like Disney.

Other companies like AT&T's (NYSE:T) WarnerMedia are considering reboots, prequels, and sequels of popular series from the past. WarnerMedia announced a reboot of Gossip Girl, and HBO is reportedly developing a prequel to Game of Thrones. While these series might attract loyal fans, they don't provide the same incentive as the Marvel series will.

Disney investors may fear that Disney may be cannibalizing itself with the release of Disney+. It seems very likely Disney+ will cut into a lot of Disney's home entertainment sales, but that's not exactly a bad thing.

Likewise, some Marvel fans who would normally go to the theater for most Marvel film releases may reduce the number of films they see in theaters and instead wait for them to come to Disney+ after their theatrical run. After all, they'll have a lot more Marvel content to keep them busy, considering Disney already has four series planned.

It's important to note that while the box office remains an important source of revenue for Disney, the company only keeps about 50% to 55% of gross receipts at movie theaters. Establishing a direct relationship with consumers paying monthly has the potential to generate a comparable amount of revenue, if not more, than a couple that goes to see four Marvel films per year. So, if adding a Disney+ subscriber comes at the cost of a few fewer tickets sold, it's still worth it for Disney.

By comparison, WarnerMedia's HBO Max is much more likely to cannibalize HBO without providing significant incremental revenue for the company. WarnerMedia is investing hundreds of millions, if not billions, in new content and licensing old content for the service, but practically valuing it at only a few dollars per month per subscriber. Disney's strategy ought to provide significantly greater returns for its investment, even if it does cannibalize some of its other business.