Logitech (NASDAQ:LOGI) may be best known for PC peripherals like mice and keyboards, but that's not where its growth is coming from. Instead, video collaboration, mobile speakers, and tablet accessories drove the company's better-than-expected fiscal first-quarter results. Despite flat sales of PC peripherals, Logitech managed to grow its total revenue and its adjusted earnings per share.

Logitech reported first-quarter revenue of $644.2 million, up 5.9% year over year and about $6 million above the average analyst estimate. Adjusted for currency, revenue was up 9%.

Logitech blamed the weak gaming performance on a tough comparison due to Fortnite, a popular free-to-play game that has spurred sales of gaming headsets and other accessories. Growth in audio and wearables was due in part to the acquisition of Blue Microphones, which cost the company $117 million.

Video collaboration put up strong growth thanks to MeetUp, a videoconference camera for small conference rooms, and Rally, a premium videoconferencing offering. Mobile speaker sales benefited from the launch of the Wonderboom 2 in June via Logitech's Ultimate Ears brand.

Geographically, Europe, the Middle East, and Africa was the strongest region, growing revenue by 12% year over year to $179 million. Americas revenue was up 6% to $293 million, while Asia-Pacific revenue was flat at $172 million. 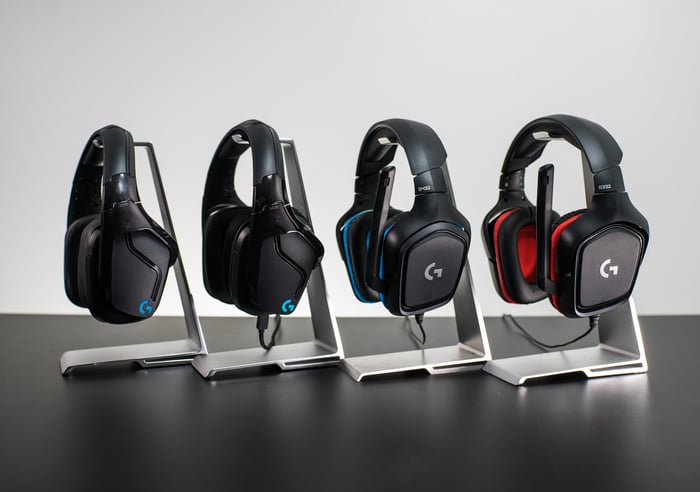 Logitech reported non-GAAP (adjusted) earnings per share of $0.39, up 15% year over year and $0.04 better than analysts were expecting. On top of higher revenue, earnings growth was driven by an improved gross margin and operating expense discipline.

Adjusted gross margin was up 0.4 percentage points year over year to 37.8% in the first quarter, despite currency and tariff headwinds. The company pointed to cost savings, efforts to minimize the impact of tariffs, and product mix improvements for the increase. Logitech targets an adjusted gross margin between 36% and 40%, and its first-quarter results landed right in the middle of that range.

Adjusted operating expenses rose 6% year over year, in line with revenue growth. Logitech increased both sales and marketing spending and research and development spending by 7%, but it reduced its general and administrative spending by 3%. "And if you really dug underneath, on the sales and margin expenses, we're really trying to increase the amount of real marketing spending we're doing at the expense of promotion," said CEO Bracken Darrell during the first-quarter earnings call.

With the PC market not offering much in the way of growth opportunities, Logitech has found success outside of mice and keyboards. Poor gaming performance may be the most disappointing part of Logitech's first-quarter report, but strong growth in non-PC categories was more than enough for the company to deliver solid results. With guidance calling for similar growth for the rest of the year, Logitech is betting these growth categories can continue to make up for a sluggish PC market.