Please ensure Javascript is enabled for purposes of website accessibility
Free Article Join Over 1 Million Premium Members And Get More In-Depth Stock Guidance and Research
By Reuben Gregg Brewer - Jul 23, 2019 at 8:45AM

Preserving the environment is one goal, but utilities are in business to make money. Here's why renewable power investing may be riskier than you think.

Over the past couple of decades, the share of U.S. electricity generated by coal has declined materially. On the surface, the big driver of that drop-off is a global shift toward cleaner fuel sources. But look deeper, and you'll see there are other issues in play. The CEOs of Duke Energy ( DUK 2.28% ) and Xcel Energy ( XEL 0.80% ) recently explained exactly what's going on, in their views. Here's why transitioning to clean-energy sources is so hard, and why scale and diversification will be increasingly important in this industry.

In June, Reuters polled 3,281 U.S. residents about their feelings on environmental issues. The results were pretty clear: 69% of respondents believe that "aggressive" action is needed to help fight climate change. However, when the same people were asked if they would be willing to pitch in $100 a year to help get the environmental ball rolling, support dropped to 34%. The tiny incremental cost of $8.33 a month was enough to reduce support for attacking the causes of climate change by half.

That reflects exactly what the heads of Duke Energy and Xcel Energy have been saying lately. Ben Fowke, the CEO of Xcel, summarized the issue at a recent conference: "[Customers] do want to see us reduce carbon emissions, but they don't want to see us do it at the price of affordability or sacrificing reliability. So, I think this transition will happen because customers want it, but it has to happen at the speed of value that technology brings." Basically, people don't want to see big increases in their bills, nor are they willing to accept power shortages. As promoters of traditional fuels are quick to point out, wind and solar are intermittent power sources -- solar panels only work when the sun is shining, and wind turbines only turn when the wind is blowing.

Which brings up some interesting numbers. Coal, one of the dirtiest sources of electric power, has seen its share of the power grid fall, while renewable power's share has increased. But the most notable growth over the past decade or so has been the percentage of electricity generated by natural gas. Effectively, utilities are replacing their oldest and most-polluting base-load coal plants (facilities that run continuously) with cleaner-burning natural gas plants. That's driven by a lower cost of construction and low natural gas prices, but with the add-on benefit that natural gas burns more cleanly than coal.

Renewable power has indeed grown into a notable contributor to the grid, but it's not the biggest story in the U.S. power market despite the headlines it generates.

The U.S. Energy Information Administration (EIA) expects coal plant retirements to slow materially by 2025, and those that remain will be run at higher utilization rates. As a result, coal's contribution to the U.S. grid should remain fairly consistent between 2025 and 2050. The biggest factor that will influence that is expected to be the cost of the fuels in question. If natural gas stays cheap, coal will face greater challenges, but so, too, will renewables, which would continue to grow their market share, but at a slower pace. Effectively, renewables will be competing primarily with more-efficient and cleaner-burning natural gas in the future, rather than with dirty coal, which will make renewables a little bit harder to sell.

To be fair, these are just educated guesses, and the EIA has been wrong before in its long-term projections. (It's not exactly easy to accurately look ahead 30 years.) But the logic is sound, and the forecast fits with what utility industry CEOs are saying and doing. For example, coal made up 61% of Duke Energy's generation in 2005, with natural gas pitching in a tiny 6% and renewables a scant 1% (nuclear power made up the rest). By 2018, coal was down to 31%, natural gas up to 32%, and renewables had risen to 5%, with nuclear's contribution remaining constant.

Obviously, natural gas was the biggest gainer, and it will continue to be if Duke's current plans pan out. By 2030, it hopes to get coal down to just 15% of its mix, with natural gas increasing to 41%. Renewables are projected to increase to 14%. (Nuclear will continue to make up the rest.) That implies a balanced approach from Duke, with reduced coal exposure shifting in roughly equal proportions toward natural gas and renewable power. 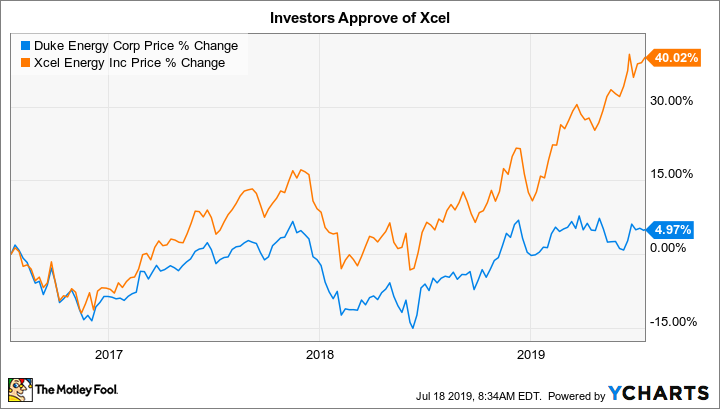 Xcel is taking a more aggressive approach. Coal's share of the company's generation fell from 56% in 2005 to 33% in 2018. Renewable power took up the largest share of that slack, increasing from 3% of the mix to 22%. Xcel is one of the largest players in wind power, partially because it serves markets in generally windy states. The company hopes to get 60% of its power from renewables by 2030, with coal, natural gas, and nuclear filling out the mix. But it notes that regulatory approval will be needed to make that happen -- cost and system reliability are two key factors that regulators consider when making such decisions.

Also interesting to consider are the recent comments utility peer Southern Company ( SO 1.32% ) about the increasing investment risks in the renewable space. Put simply, it has pulled back from building renewable power assets that sell electricity to others because it hasn't been comfortable with the financial returns available, or the strength of the counterparties to the long-term contracts backing these investments. That last risk was on clear display when PG&E got court approval to renegotiate some renewable power contracts it had signed before it declared bankruptcy. That could have big implications for both large and small players in the renewable industry. 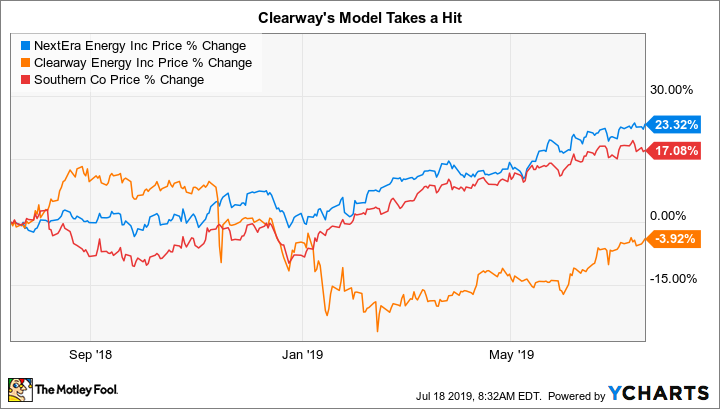 For example, renewable power upstart Clearway Energy ( CWEN -0.75% ) proactively cut its dividend because of its exposure to PG&E. NextEra Energy ( NEE -0.67% ) also had a handful of assets selling power to PG&E. But size matters. NextEra owns the largest regulated utility in Florida, the foundation upon which it has built a huge business selling renewable power to other utilities under long-term contracts. As a diversified giant, NextEra can handle the hit from PG&E, where a relatively tiny renewable power-focused company couldn't.

Where renewable power is really headed

Yes, renewable power is set to keep growing, and there will be a lot of money to be made in the industry. But be careful not to get too caught up in the hype. Utilities have to live within real-world constraints (which they are openly telling investors), and those will have an impact on renewable power's growth rate.

So far, the biggest news hasn't really been the growth of renewable power, it's been the shift from coal to cleaner natural gas. With that transition nearly over, renewables will increasingly have to compete with relatively new and low-cost natural gas plants. If natural gas stays cheap, it could be a lot harder to convince utilities -- and their regulators -- to aggressively switch to renewables.

Technological advances could change that equation. We could see rapidly falling solar panel prices and improvements in large-scale energy storage, for example. But be careful about how you choose to invest in the renewable power space. Bigger players with more diversified businesses (such as NextEra and Southern) may end up being better calls than small, niche renewable players (Clearway) that don't have anything else to fall back on.